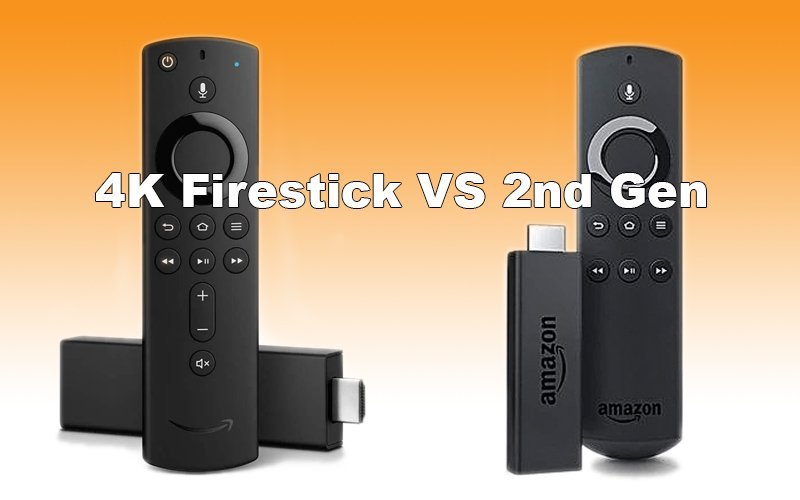 When it comes to home entertainment, Amazon Fire Stick is one of the best devices that can provide you entertainment at home. It can also provide you a home cinema feel on its generation and model. 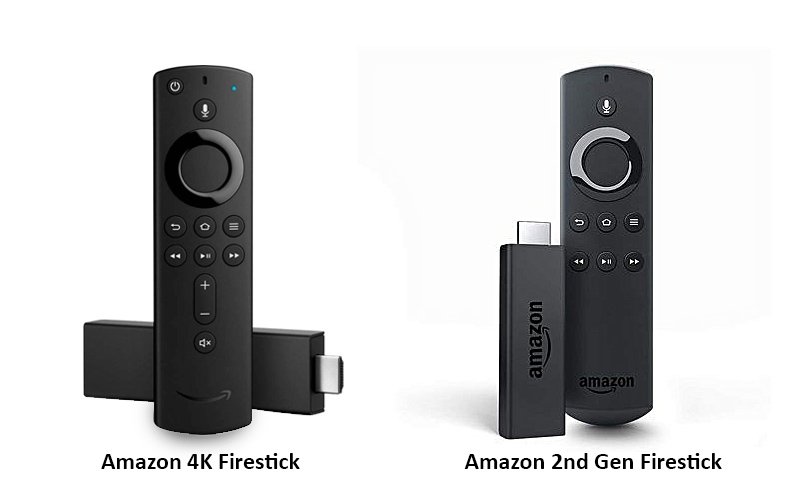 It was designed to attach directly to the HDMI port on the back of your TV. On the side of the device, there is a micro USB port that supplies power to the device.

If you have a new TV, then there would be a USB port that can be used to supply power to the device. If your device doesn’t have a USB port, then you can use the supplied USB cable to power on your Fire Stick.

The only thing you have to do is to hold down the button, summon Alexa and wait for the task to be complete. In this way, you can get the exact show you are looking for.

In the case of 4K Firestick, there are small changes in the design of this model in comparison with the 2nd Gen Fire Stick.

Its dimensions are 99mm × 30mm × 14mm. It is a little larger than the previous model. It can be connected directly with HDMI 2.2 port on your TV. As it is a little bit wider than the standard HDMI cable, Amazon has included an HDMI extender cable (male-to-female) with the package.

It also has a micro USB port like the 2nd Gen Firestick. Most of the design changes are in the remote of Fire Stick. Power, Volume and Mute are additional buttons in the 4K Firestick remote.

It means, you don’t need to use your TV’s remote to control the volume of the show and you can also turn it off using only the Fire Stick’s remote. As it operates with infrared light, it can control the volume and power of the TV. Now this upgraded remote is included in boxes of both 2nd gen firestick and 4K firestick.

There are a lot of changes in the operating system of the 4K Firestick and the 2nd gen Firestick.

The 2nd generation Firestick has a quad-core central processing unit with a 4× ARM Cortex-A7 core of 1.3 GHz and operates on a 32-bit width. The specific name of the system is MT8127D because it runs on Mediatek 8127D. The system version is 5.2.6.9. It has its own Fire OS system which is designed by Amazon, especially for Fire Sticks. It has a Fire OS 5 version. It can support many android apps on your TV. Fire OS is a modified face of Android OS, used by Amazon in its devices. Fire OS 5 is a modified form of Android 5.1 Lollipop. So, you can operate all apps on your TV that support Android 5.1 Lollipop. Moreover, it has a GPU model of Mali450 MP4.

The 4K Firestick also a Quad-core central processing unit 4× ARM Cortex-A53 operate on 1.7 GHz frequency. It operates on a 64-bit width system. This device runs on Mediatek K8695 and has a specific name MTK8695. Its system version is 6.2.5.8. The GPU model of this stick is IMG GE8300. It has the latest version of Fire OS 6 which is an alternate of Android 7.1 Nougat. You can use any app from the app store on your screen that supports Android 7.1.

There’s not a lot of differences with the 4K Firestick and 2nd Gen Firestick memory and storage.

2nd gen Firestick has a 1 GB Low Power Double Data Rate Synchronous Dynamic RAM of 3rd generation, which is commonly known as LPDDR3, it is the same RAM which is common in mobiles, computers, and laptops. It can store up to 8GB data internally. You can purchase Amazon Cloud Storage to store digital content there.

4K Firestick and 2nd Gen Firestick both supports Wi-Fi and Bluetooth but there are little changes in the version and mode of these models.

The 2nd Gen Firestick support Dual-band 802.11 b/g/n/ac 2×2 MIMO and dual-antenna Wi-Fi Networks. It can support up to 4.1 version of Bluetooth with LE. Its Bluetooth supports A2DP, AVRCP, GAVDP, HID and IOPT profiles.

The 4K Firestick support to the same Dual-band 802.11 b/g/n/ac 2×2 MIMO and dual antennal Wi-Fi Networks. While in the case of Bluetooth it can support the latest version 5.0 Bluetooth and LE, which is compatible with Bluetooth Speakers, headphones, video game controllers and many others. Ethernet support is not inbuilt but can be done with the help of an optional Amazon Ethernet Adapter in both models.

There are quite a few differences in the requirements of both 4K Firestick and 2nd Gen Firestick to operate smoothly.

2nd gen Firestick requires a high definition television with available HDMI input, a steady internet connection via Wi-Fi and a power outlet. It is compatible with HD TV of 1080p or 720p at a frequency of 60/50Hz like HDCP-compatible models.

4K Firestick requires a High-definition television having a high-speed HDMI input and a high-speed internet connection via Wi-Fi; the speed of the internet should be at least 20mbps to stream without any interruption. It requires at least HDCP, to support protected content playback. While it can be operated on 4K ultra HD TVs with HDMI capable of 2160p at 24/25/30/50/60 Hz frequency and HDCP of 2.2 or 2. While in the case of HD TVs, its requirements are as given above.

Both 4K Firestick and 2nd Gen Firestick support voice control with the help of Alexa Voice Remote. However, both don’t have any inbuilt microphone in the stick.

As Alexa Voice Remote of 4K Firestick works with infra-red radiations, you can control a large number of devices that use IR-radiation. With your TV, for example, you can control power, volume, and mute options with the help of this remote. There are limitations to certain IR devices. In the case of audio support in the 4K Firestick, it supports Dolby Atmos, 7.1 surround audio, 2-channel stereo, and HDMI audio pass-through up to 5.1. However, Dolby Atmos is not supported by Netflix titles, currently.

Output resolution is one of the main differences in “4K Firestick VS 2nd Gen Firestick”. It is a little bit different in content format support too.

Amazon Fire TV Sticks are super speedy devices. You can load anything on it instantly (also depends on your internet connection).
Let’s talk about 2nd gen Firestick features, the main thing is its interface which is laid out straight from the homepage which is simple, not only for regular users but also for newbies.

Recently accessed shows and apps can be found on the home screen or you can find it by scrolling it up. Alexa Voice Remote control is one of the contrasting features of Amazon Firesticks. It is very accurate in voice recognition so, you can find any show or content easily. The simple thing you have to do is to hold the Voice Control button and say the name of any content which you want to watch.

The biggest bugbear is its search engine. There are a lot of streaming services (other than Amazon flagship content like Amazon Prime Video and Netflix) that are not covered by Amazon Fire Stick voice search. You have to search for those services by navigating those apps. When you open any app in it, you can see the app’s interface, you can search anything it by manually, using a keyboard (with the help of Alexa Amazon Remote) present on the screen.

For Example, if you search for a show which is only available through BBC iPlayer, Amazon search engine will not show you any content; you have to search it manually by operating the app and then navigating in it by using the on-screen keyboard. Overall, the voice search is accurate and fast.

In streaming, it does not cause any problem. Once you get your required content, it streams it without buffering (sometimes it may cause problems due to connection problems). It also gives a smooth playback to your previous content. It can stream up to 1080p having 60fps speed.

After doing a simple setup for your 4K Firestick you can use your TV with the help of Amazon Firestick remote. It has the same search method as in the previous one and it works only on apps like Netflix and Amazon Prime Video. Overall, search quality and accuracy are enhanced in the 4K Firestick, now, you can search for shows by the name of actors and specifically for 4K content. The homepage is almost the same as in the 2nd gen Firestick but the voice search speed has been increased (probably due to high-speed Wi-Fi input).

Several apps can support only 4K Firestick that is a great achievement for the 4K Firestick. You can now access a large number of shows, movies, and episodes. It is due to the upgraded version of Fire OS.

You can stream a full 4K content in it having 2160p result up to 60fps speed.

The 2nd Gen Firestick is priced at $34.99 with all its accessories included: a Firestick, HDMI extender, Power adapter, 2 AAA size batteries, and an Alexa Amazon Remote. HDMI extender can be used to extend a connection between Firestick and TV while batteries are there for the remote.

While the 4K Firestick is priced at $49.99. The package contains almost the same accessories except for a 4K Firestick instead of the 2nd Gen Firestick. There is a little difference in the price of these two products. Overall, the 4K Firestick is much better in “4K Firestick VS 2nd Gen Firestick” due to several features in it.