Uncut Gems: What is The Movie About? 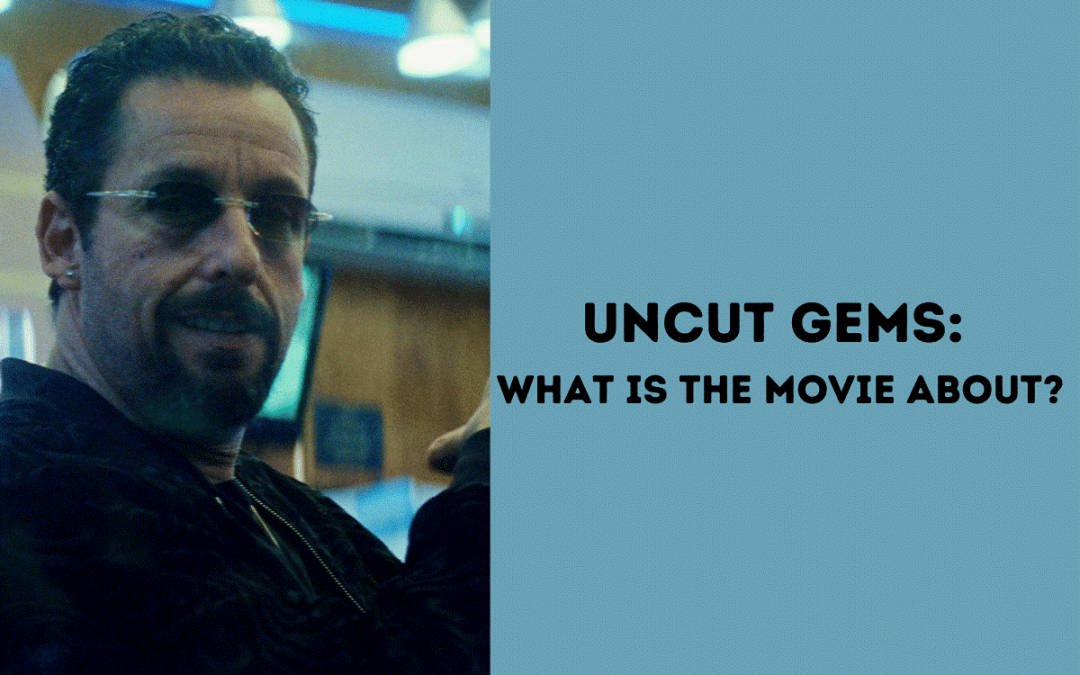 The 2019 gambling movie Uncut Gems was Adam Sandler’s return to the world of movies and his most critically acclaimed work to date. Directed by Josh and Ben Safdie and starring Adam Sandler, Lakeith Standfield, Julia Fox, Kevin Garnett, Idina Menzel, and Eric Bogosian, this movie is about a compulsive gambler and Jewish jeweler Howard Ratner who stakes it all to retrieve an extremely expensive jewel to get rid of all his debts.

If you are a fan of action gambling movies, we recommend you to watch this one. Uncut Gems was hailed as a critical hit and one of the best of Sandler and managed to rake up quite a sum in terms of box office success. This crime thriller shows the downfall of a compulsive gambler and the outcome of greed that resulted in a tragedy.

An American Jewish jeweler Howard Ratner is an addicted gambler who makes high bets despite not being able to afford the consequences of the bets, often plunging into debts. With tumultuous family life and increasing debts and problems, he sees a chance to escape all debts when he gets the rare Ethiopian black opal in his hands.

The black opal was seen to be excavated in Ethiopia at the beginning of the movie, where two miners secretly steal the opal to be pawned off for huge sums.

Howard finds the gem and is determined to make massive profits out of it. He shows his gain to a basketball player and a friend of his business partner Garnett. Garnett becomes obsessed with the gem, assuming it to be his good luck charm, and borrows it from Howard, promising to return it within a week or so.

Howard reluctantly lends it to him and then bets on Garnett to win the NBA championship. Next, Howard’s bet falls through and he gets robbed of his money and is forced to come to an agreement with his estranged wife due to this unforeseen situation that befalls him. He also realizes that Garnett, who had promised to return the black opal, had not done so.

Meanwhile, Julia, the girlfriend of Howard was seen to be taking cocaine along with the singer Weeknd, misreads the whole situation and accuses Julia of adultery. He breaks off things with her and asks her to move out of his apartment.

Garnett returns and offers Howard to buy the black opal for an impressive amount of $1,75,000 but Howard refuses, firmly believing that he can get a higher price for the opal at the auction. Garnett demands his ring, which Howard had already sold off, and gets into an argument with Germany who ultimately leaves him.

His wife, Dinah, also refuses to get back together with him, leaving Howard all alone. He is crestfallen when he sees that the black opal could not fetch the $1 million price that he desired and asks for a favor from his father-in-law to help raise the bid.

Yet, he loses the opportunity to sell the opal as he tries to outsmart his father-in-law. Howard gets assaulted and goes back to Julia in his bloody condition where they reconcile.

Howard is still optimistic as he is firm in his belief that the black opal can still be sold. Garnett, who was still willing to purchase the black opal, finds him and offers to buy it. He sells it to Garnett and gets enough money to pay off his debts.

Howard then decides to bet the money on Garnett and instructs Julia to place the bet for him. Another fight breaks out between Howard and his debtors but he locks them up instead. Howard wins big as Garnett’s team wins the game but his happiness is short-lived.

One of his debtors shoots and kills Howard on the spot and the others ransack his store while Julia flees with all of Howard’s wins.

The Message Behind the Movie

Uncut Gems is not just the story of Howard Ratner, it’s a story of the multitudes. Uncut Gems is based on real-life stories of gambling addiction and destruction accompanied by gambling.

Howard as a dysfunctional gambler and absent husband, father, and distraught friend represents the lot who abandon their duties towards their own to seek self-satisfaction, satiate their greed, and fall prey to the tempting but disastrous life of gambling.

Howard Ratner was a jeweler and an active gambler but he could not control his urges to stop betting. Instead of gambling just a few times for fun, Howard plunged deep into the betting world, driven by greed and pleasure, and crossed all limits which could have saved him.

There are many such situations described on NonGamStopBets.com which review and gather popular credit card gambling sites. In spite of being assaulted time and again for remaining debts, he continued his streak of reckless gambling, going as far as becoming distant from his family and friends, even long-term business partners.

His avarice for personal benefits drove him to the edge from which return was not possible.

Howard’s hasty decisions and unstable life made him a complete mess as portrayed brilliantly by Adam Sandler. His life became a tangle of complications and troubles which led him to deeper pits with no escape. Howard’s life acts as a prime example of the general life of compulsive gamblers and their everyday tragedy.

Although in reality, people do not meet the same end as Howard, they do sink into depths of dues and charges which haunt them for the rest of their life.

Apart from the moral degradation from excessive gambling, the movie also shows the pitiable conditions of the miners and their plight under the capitalistic hands of first-world countries. The discovery of the black opal is not just for a show of an expensive jewel, that one gem holds the suffering of thousands of miners who die or are amputated while digging for one stone.

Uncut Gems also handles the sensitive issue of smuggling and the end of a smuggler when caught.

Therefore, this movie acts as a lesson for all those compulsive gamblers and smugglers who live lives similar to Howard Ratner. It shows how one can go through absolute hell for being too caught up in the glamorous world of money and casinos and incur not only individual monetary losses but also lose track of themselves and their sanity.

Preventive Measures for Gambling Disorder – Why Movies are Necessary

Gambling is a hobby that should be undertaken keeping in mind the risks that accompany it. Professionals and amateurs alike should keep track of themselves and draw a fine line between regular gambling and compulsive gambling.

The first step that they can take is to identify the signs of excessive gambling and seek help when they have realized it. Taking preventive measures and being careful would reduce the chances of falling into the depths of gambling disorder.

Apart from familial help, they can also seek the help of gambling controlling apps that would regulate their use of online casinos and ban them from websites if necessary. The other alternative to real-life gambling would be enjoying casino-based movies instead which would allow players to experience the thrill of ambling without incurring any losses to themselves.

Movies like Uncut Gems would also act as a warning to prevent the same fate as the protagonist. Lastly, it would be imperative to practice healthy gambling habits to make it enjoyable for the gamblers themselves while also ensuring their safety from disorders.