UGOOS AM7 Review – Does it Justify its Price 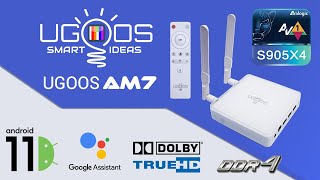 UGOOS AM7 is a full android TV box running Android 11 with powerful specs packed in a smartly built design. It is a feature-rich product that offers premium performance but comes with a hefty price tag.

Let’s find out if the TV box justifies the investment it asks for in this UGOOS AM7 Review.

Features of AM7 – How Fares in Different Areas

AM7 features a simple, minimalistic, compact, and lightweight design which is elegant nonetheless. The square-shaped housing is made up of plastic which is not cheap by any means. It boasts a solid and sturdy structure that can withstand accidental drops and offers high durability.

Ports are smartly placed for convenient plugging and unplugging of cables which prevents tangling. It has HDMI, LAN, OTG, and a power input on one side and three USB 3.0 ports on the other side. External antennas are on the back which can be removed if they are not required.

The number and types of ports in this box are unmatchable, especially in this price bracket. USB 3.0 is very rare in such products and this box has not just one but three of them in addition to one USB 2.0 port.

The bottom features four rubber legs to hold the box firm even on slippery surfaces. A very large vent is also built on the bottom which ensures that the components never heat up.

AM7 also offers a long-lost power button which is nice to see. LED lights are available at the top which displays the status of the box.

AM7 is powered by Amlogic S905X4, one of the fastest chips to have ever existed. Be it streaming, games, or casual browsing, it never disappoints. It has excellent support for Mali G31 to process graphics and offer premium color and detail rendering.

Furthermore, it comes with 4GB of DDR4 RAM to offer unprecedented multitasking in a TV box.

Storage could have been a little better but at 32GB it is passable for a TV box. Users would have no trouble installing their favorite applications.

AM7 supports AV1 decoding which makes streaming on OTT platforms a delight. It not only improves video quality but also consumes lesser bandwidth which makes it cost-effective as well.

Some OTT websites are yet to adopt AV1 but almost all of them have planned to switch to it in near future.

AM7 smokes its competitors when it comes to connectivity as it features the latest cutting technologies in all components. It offers a Wi-Fi 6 wireless standard which supports a speed of up to 9.6 Gbps.

With an efficient router and a decent ISP, users would hardly ever have to buffer the streams. Accessing and streaming media on the local network is also interruption and lag-free. Furthermore, the wireless is dual-band which ensures smooth performance amidst high traffic.

Bluetooth 5.0 is also available which is the latest and offers extended ranges in addition to minimizing latency. Users would be able to communicate with the TV box even when they are not in its proximity. You can use voice commands on the remote control to run music on the box.

AM7 also offers the latest LAN port but most users would not use it owing to a super-fast wireless connection.

The playback quality of AM7 is hard to beat at this price tag thanks to its powerful GPU, AV1 decoding, and high resolution. It is one of few TV boxes that offer 4K at 60fps which makes streaming very enjoyable. Details and color rendering are spot on that create an immersive experience.

AM7 runs Android 11 as its operating system which is the latest and the fastest. Best part? It does not come with bloatware hence the users have plenty of space to download their favorite applications.

That said, it is not a google certified TV box so users may not find some applications on the Play Store. Albeit these can be downloaded via third-party applications.

Despite the lack of Google certificates, the software receives OTA updates which can solve problems and upgrade the overall firmware.

One of the very handy features in Android 11 is the built-in option to keymap the gamepad. Users fond of gaming would find it very helpful. Furthermore, an advanced feature of hardware monitoring is available which can be used in a separate draggable window.

As far gaming performance on TV boxes goes, AM7 is the best in the business. Asphalt 8, PUBG, and COD run seamlessly on the 1080p resolution. Thanks to the Mali G31 GPU, the colors and detailed rendering are very efficient.

Turning these games up to 4K causes a drop in performance but the medium and light games run flawlessly.

With a massive vent at the bottom, the components rarely heat up even when it is subjected to heavy-duty applications.

The average temperature remains between 55 – and 60 degrees centigrade because of this efficient cooling system.

Remote control maintains a minimalistic design but has everything that is required to control the TV box. A built-in mouse is surely the stand-out feature that surprisingly works extremely well.

It has been activated via a dedicated button and can be personalized as per user preferences.

Users would realize its convenience while trying to search for something on the search bar. Usually, it takes an age to write a sentence using the remote button. Thanks to this mouse the task can be completed in mere seconds.

Furthermore, it adds more fun to games, especially those that involve shooting. For most TV boxes gaming is just a gimmick because there is no proper way to play them.

But with AM7’s built-in mouse users would be able to play games on the big screen and enjoy an immersive experience.

The Downsides – Things That Could Have Been Better

While the AM7 is an overall excellent device it certainly has some areas where it could have been improved. Let’s take a look at them.

AM7 has all-powerful hardware and an efficient operating system to run all applications but a lack of certifications does not allow users to explore its full potential. Applications like Amazon Prime, Netflix, and HBO cannot be downloaded from Google Play Store.

And even if you download them from a third-party application they do not work as well.

Users cannot get maximum resolution on these platforms which is disappointing given that it offers an excellent playback quality. Furthermore, exposure to third-party applications carries an inherent risk of malware and cyber threats.

Hence, users would always have a higher risk of compromising the security of the network.

AM7 offers only about 32GB of internal storage out of which only 27GB is usable. While it is enough to store most applications, users that are fond of games may not appreciate it.

Plus, the device does not offer support for external cards which is even more disappointing. It can be a potential deal-breaker for some people.

The interface of the AM7 looks outdated despite running the latest operating system. It is partly because of lack of certification but it could have been better nonetheless.

Users can download applications to make them a little appealing but again there is not much space to store unnecessary applications.

Furthermore, the interface has not even been optimized for TV boxes. It is a standard smartphone UI with the same features and controls.

You may think that it is convenient but think again, it is not a touchscreen display but one that is controlled via remote controls. It will take a lot of time before you get a hold of it.

AM7 is an excellent TV box that is powered by the latest and cutting-edge technologies. Most users may find the price tag a bit expensive but it is justified by the hardware and performance of this device.

A feature-rich device such as the AM7 rarely comes at a price lower than what UGOOS is offering. It is fast, equipped with a powerful GPU, supports AV1 decoding and on top of it offers the latest connectivity options. All of it makes it one of the best Android TV boxes on the market.

Certain things could have been better but most users would not have too much trouble with them. So, all things considered, AM7 is an excellent TV box that makes it a great investment even in 2022.

We hope this UGOOS AM7 Review has been helpful. Thank you!