Stremio: Everything You Need to Know about Stremio 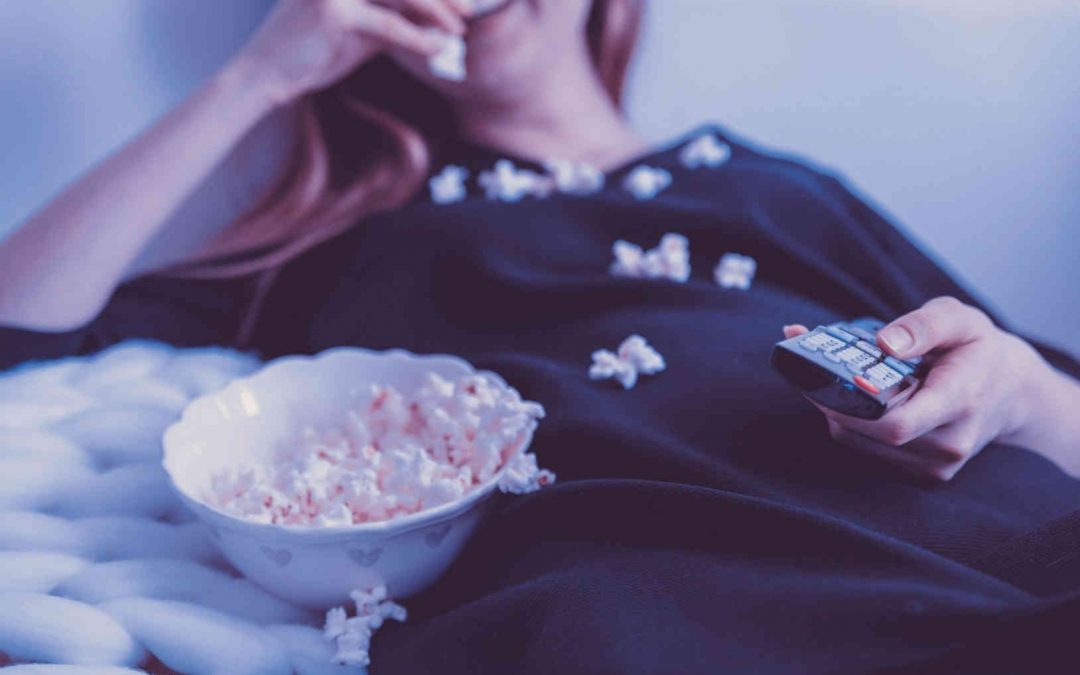 Are you a movie lover having a hard time digging through the numerous video streaming platforms in search of video content to watch?

Do you often get lost amidst multiple hours of video content? Yet still, have a tough time choosing what to watch?

Then Stremio is exactly what you need because it lets you stream multiple video contents across various platforms – desktop or mobile, no matter your operating system at play. For this reason, Stremio conveniently ranks as the only video streaming hub you would ever need. Hence, the slogan; “All You Can Watch.” I know what you must be thinking right now. Yes! Stremio is legal, safe, and free to use. Even though Stremio is accommodating contents mostly from paid video streaming platforms, it Is still a 100% free to download and use while enjoying all of its premium features gratis. Oh yes, you heard that right. FREE!!!

Stremio is a video streaming and management hub that allows users to easily discover video content by navigating through millions of titles and watching trailers from several different addons of popular media streaming platforms – like Youtube, Amazon, HBO, Vimeo, Netflix, etc. Just like most media streaming software – such as Plex, WebTorrent, and Kodi video streaming platforms. Stremio provides users with alerts, notifications, and recommendations for new audios, movies, games, and videos to watch. Besides letting users organize their favorite movies, TV series, and web channels into a custom video library. There are a host of other added features to using Stremio, which we would look into before long.

Features and Advantages of Stream.

The underlisted features are functionalities that make the Stremio app a better pick when it comes to online media streaming. These include;

As a legacy online streaming platform, Stremio could be incorporated into other legacy platforms just as listed below. These devices and platforms are the currently supported platforms for Stremio API integration, while plans are in place to increase the user-base of one of the world’s most reliable online streaming software.

Stremio is not a conventional video streaming software. Therefore it has quite a unique method of setting it up on smart TVs. During this walkthrough, we would specifically highlight on the installation procedures of the Stremio App on the last two aforementioned supported devices – Amazon FireStick and Android TVs. That said if you are a Stremio enthusiast and would love to have this intuitive video streaming and management app installed on your Android TV devices. Yet, having no idea on how to carry out this feat. Search no more, for you are just in the right place.

How to Install Stremio on Amazon Firestick.

Although the Stremio app is available on Google PlayStore, it is not included in the Amazon Store. To install the app, it has to be sideloaded onto your Amazon FireStick utilizing a third-party application such as FireStick Downloader or ES File Explorer. To sideload these third-party apps on your FireStick device, the settings for installing Apps from unknown sources has to be enabled. And here is how to do this; 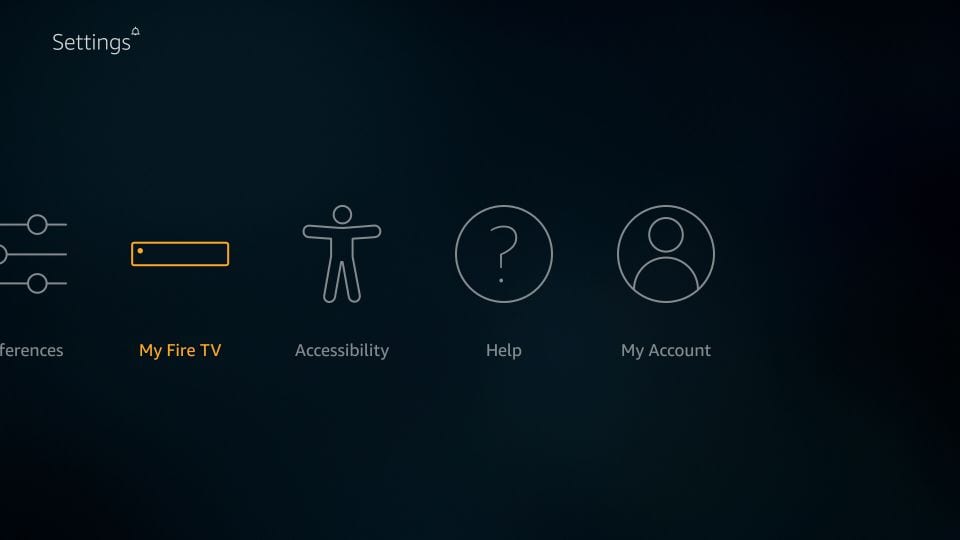 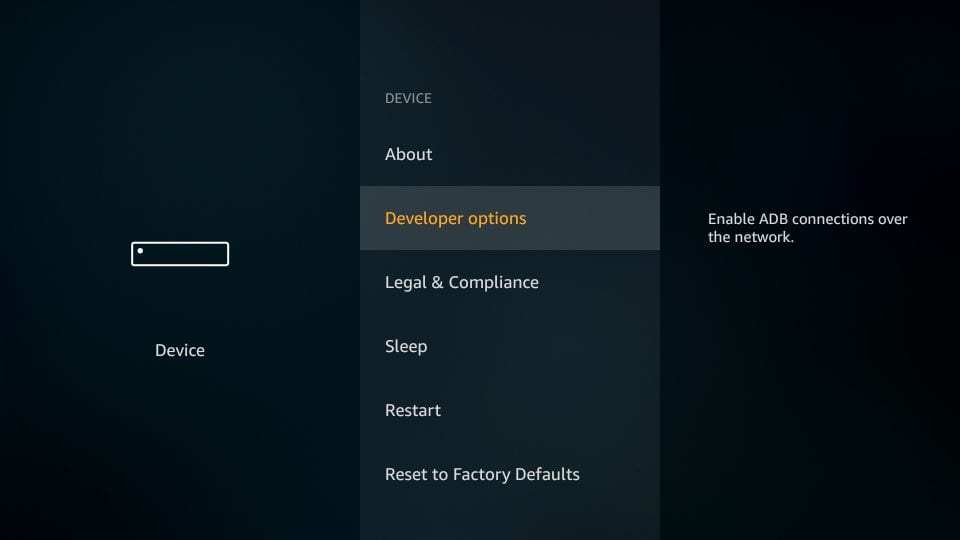 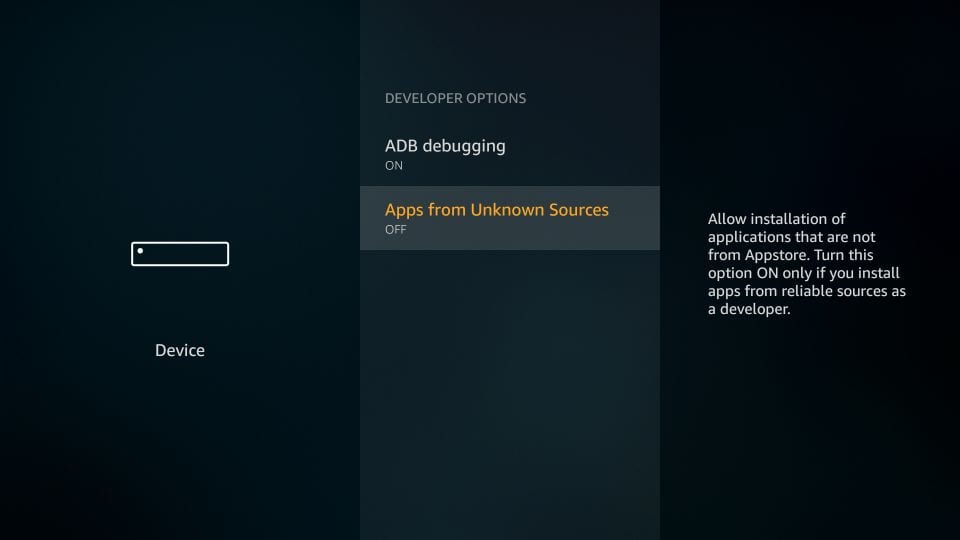 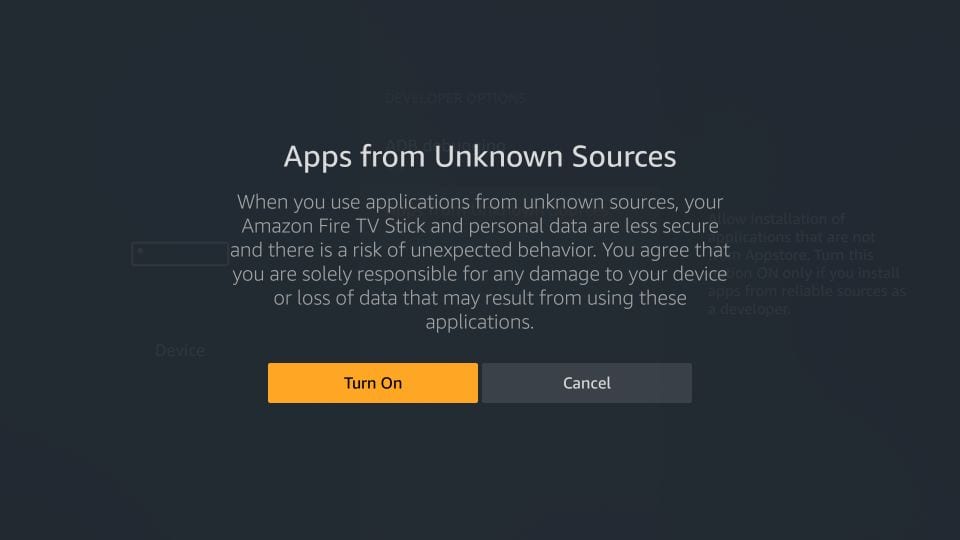 Nonetheless, the Downloader app is available on Amazon Store, and you could look it up using the search option on the home screen. To learn about this feature, you could visit the following page on how to sideload apps on FireStick. 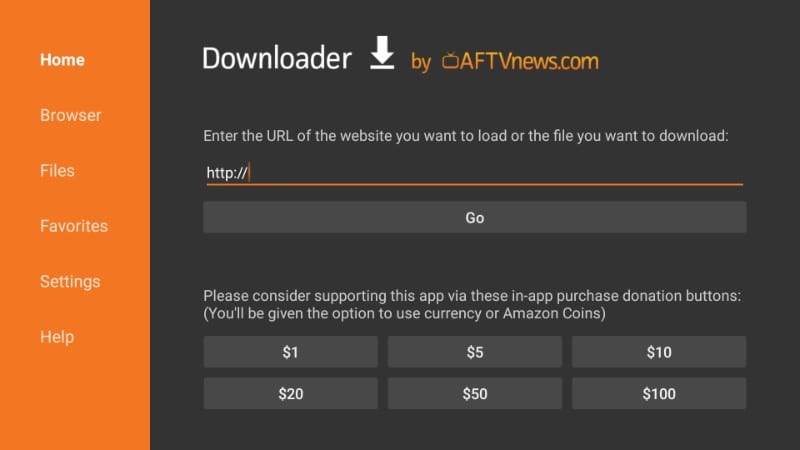 Enter the following URL in the address bar and click GO: https://strem.io

Once the page loads up, click on the Hamburger menu icon from the top right corner. 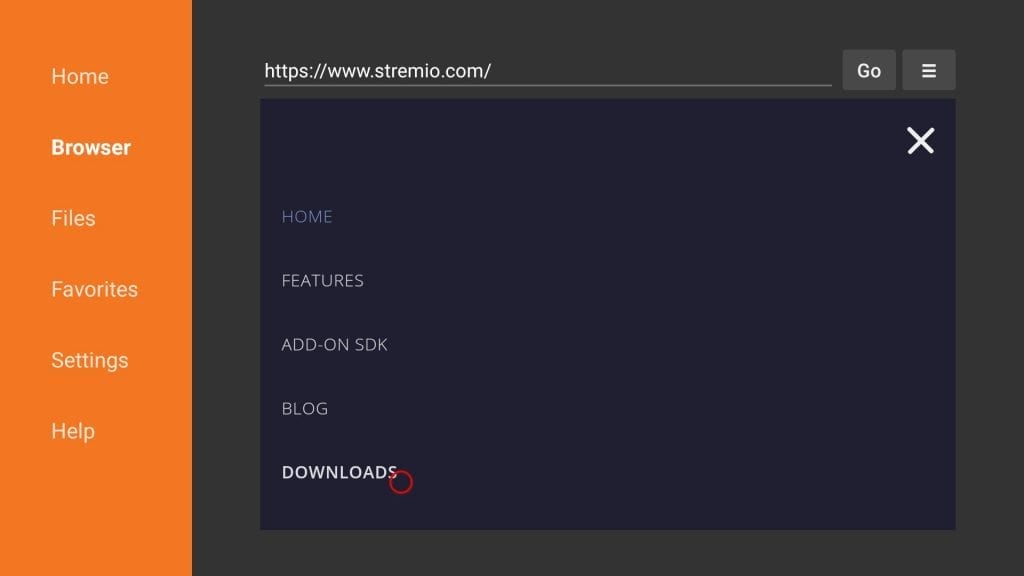 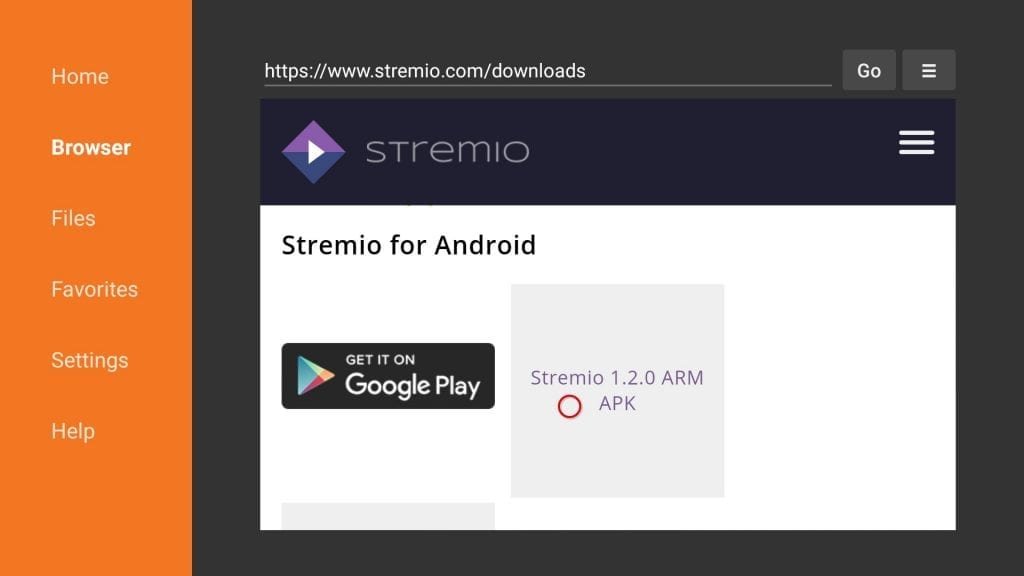 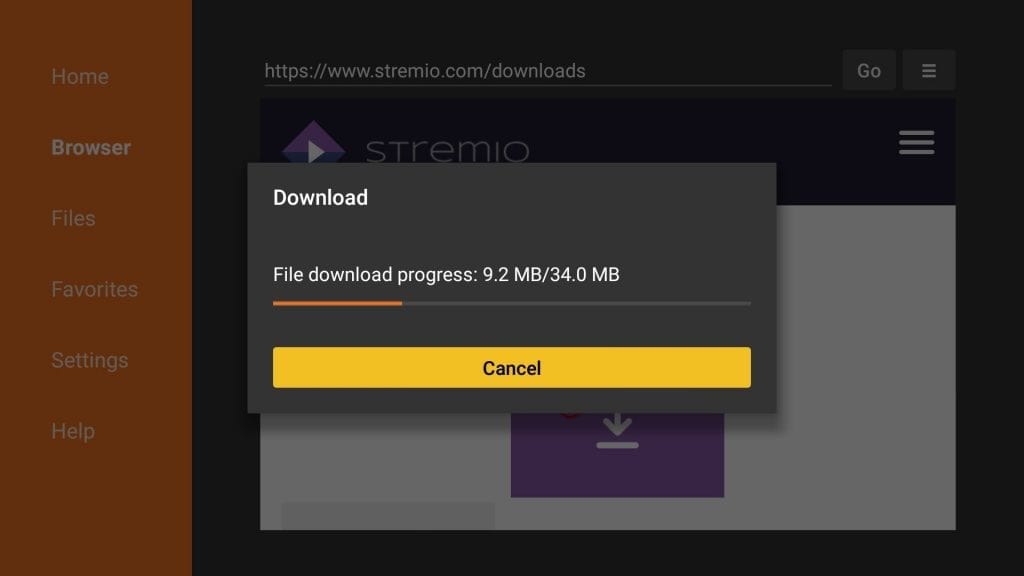 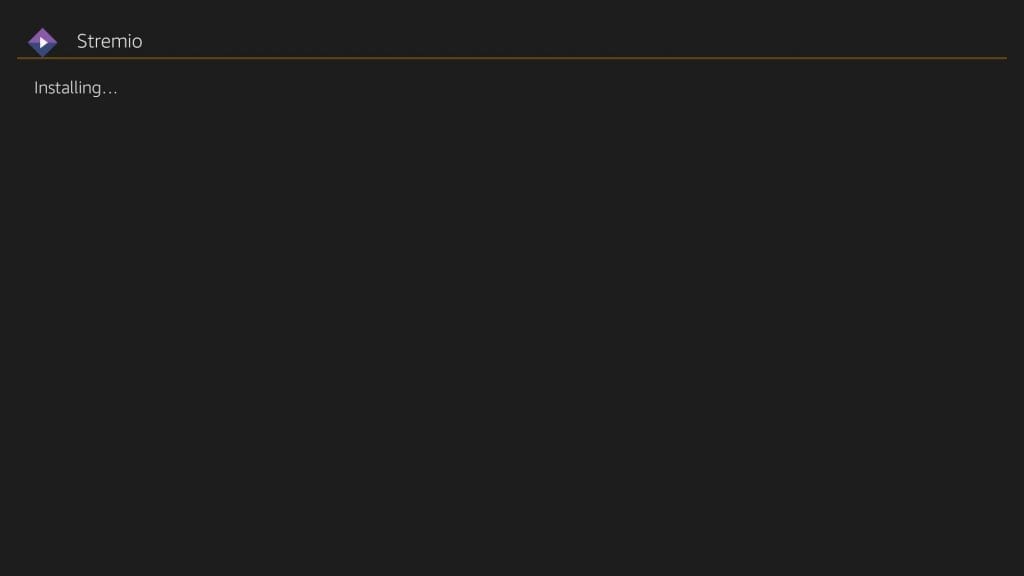 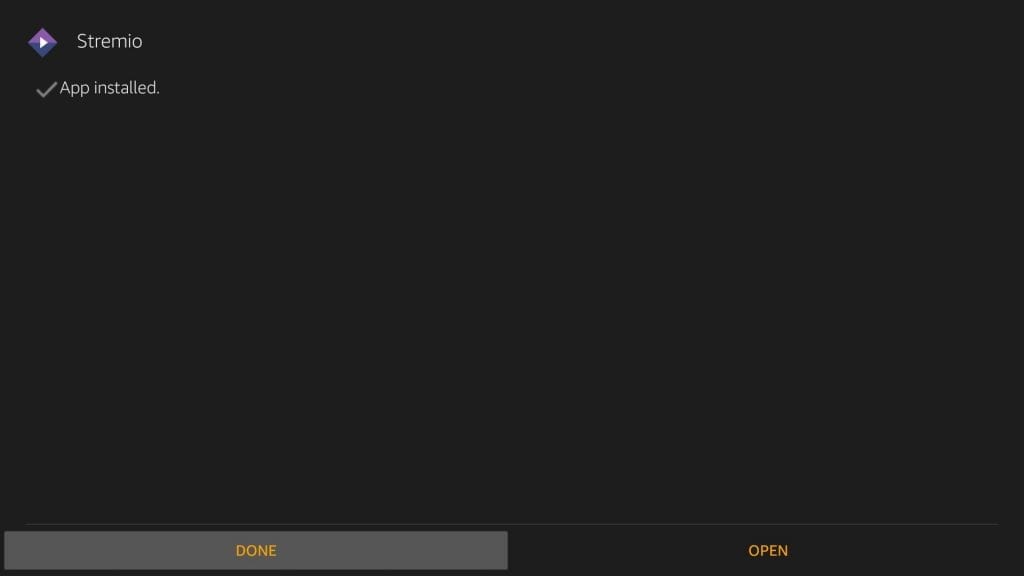 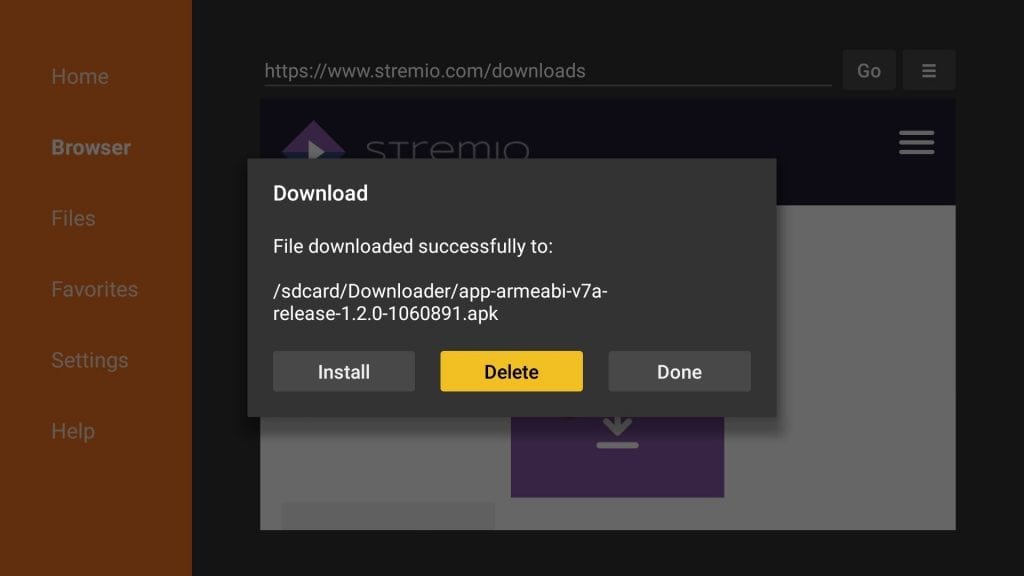 And behold, you have successfully installed Stremio on FireStick. Keep reading to learn how to install Stremio on non-native OS Android TV.

How to Install Stremio on Android TV.

The Stremio app for Android devices (Android phones and Android boxes) with the native Android OS could be downloaded directly from Google PlayStore. However, that is not the case for Android Box TVs with the actual Android TV OS (such as Mi Box and Nvidia Shield) as this process would require several steps to sideload the Stremio app since it is not available on the Google PlayStore for such devices. Stick to the following guides to learn more about how to do this. 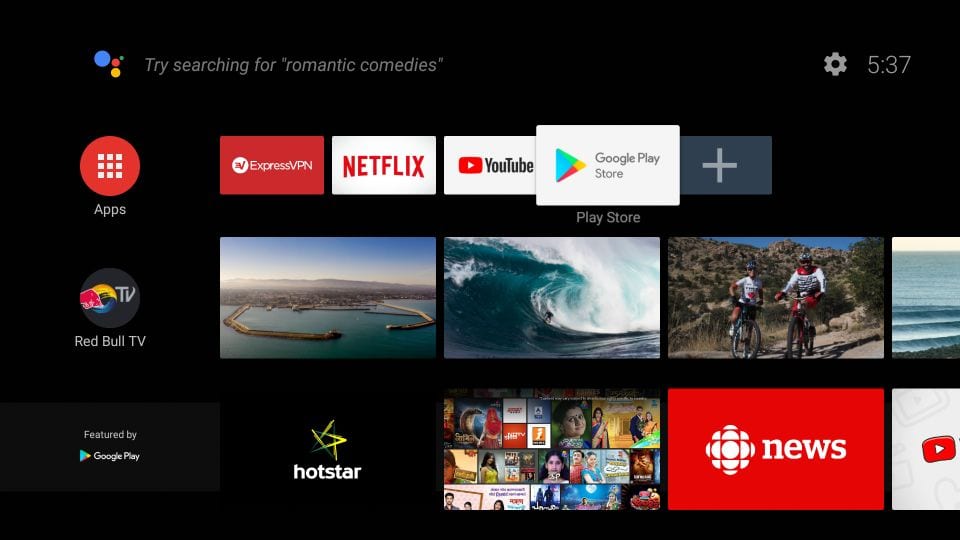 Click on Downloader when if it pops up in the search result. 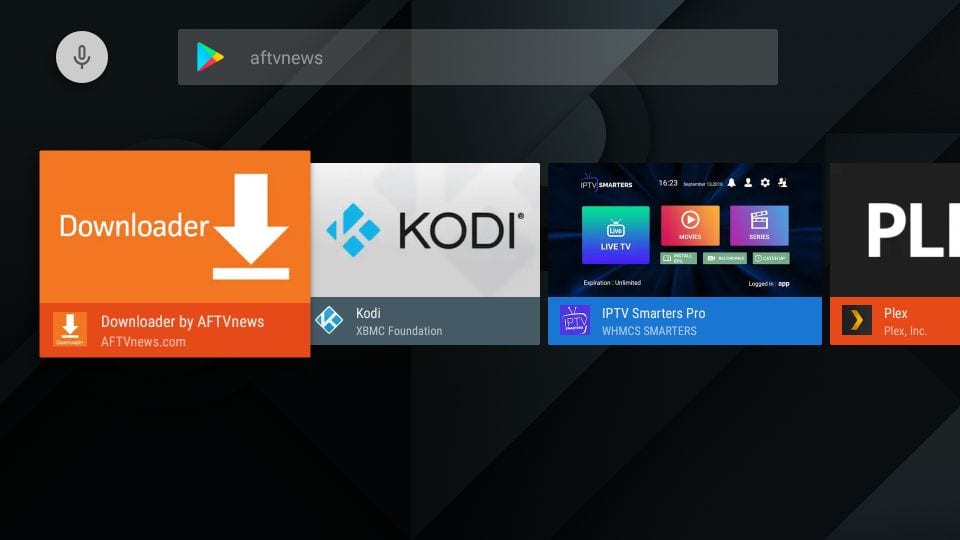 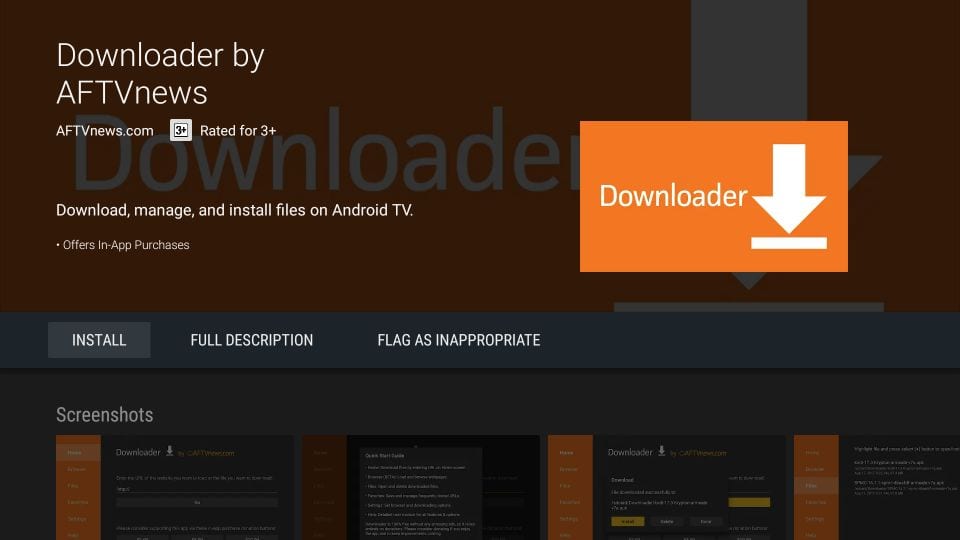 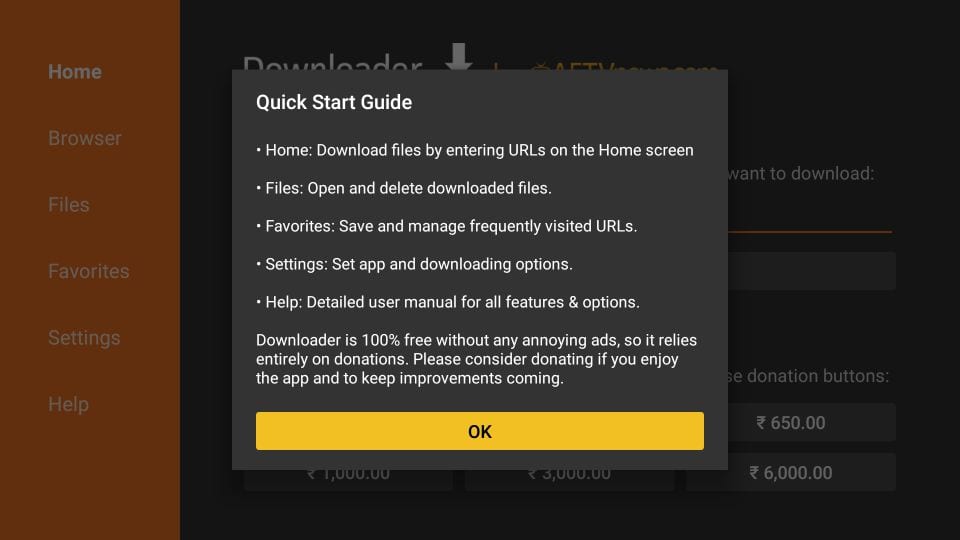 Wait for the Downloader app to download the Stremio APK file onto your Android Box storage. 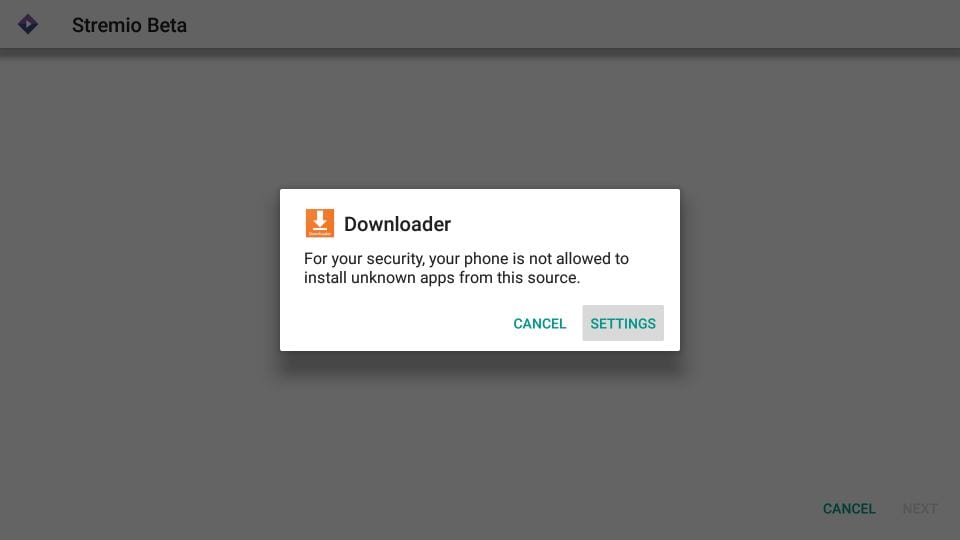 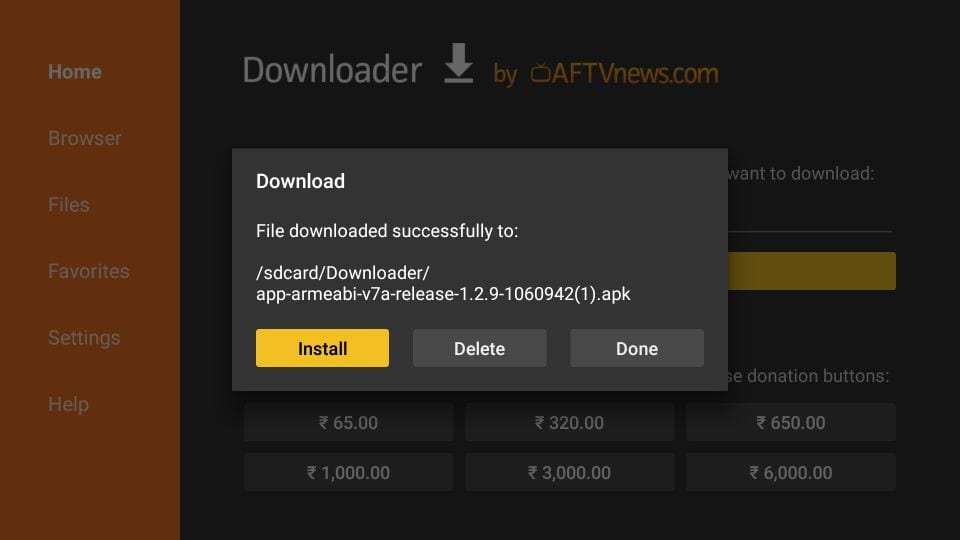 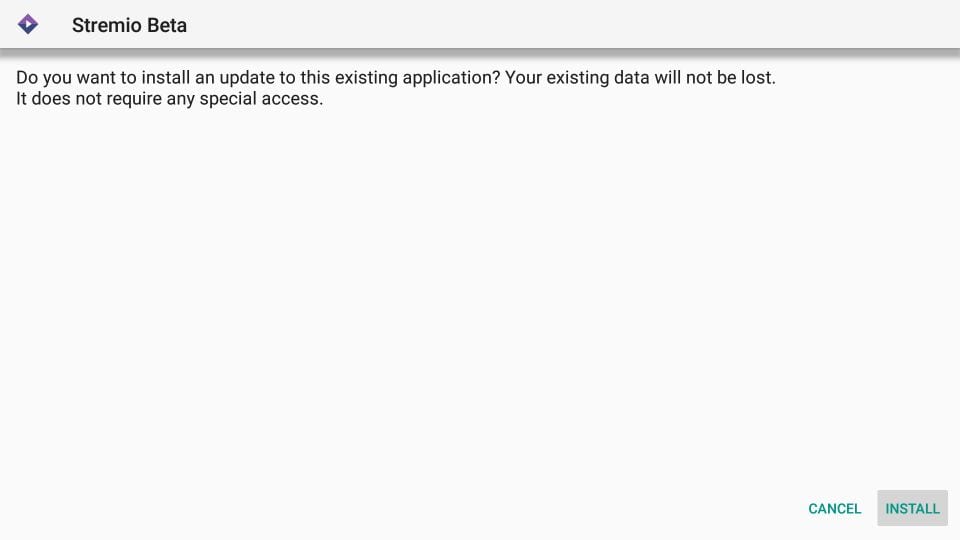 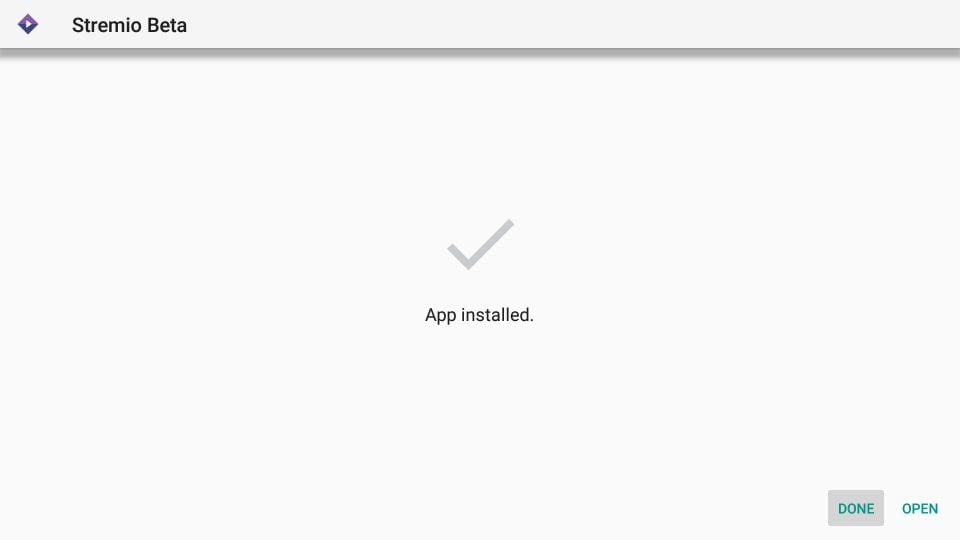 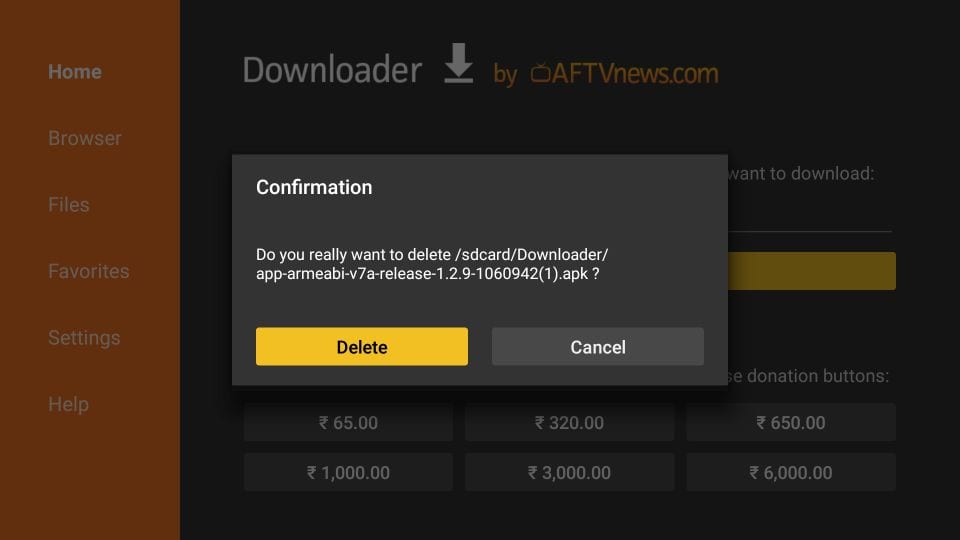 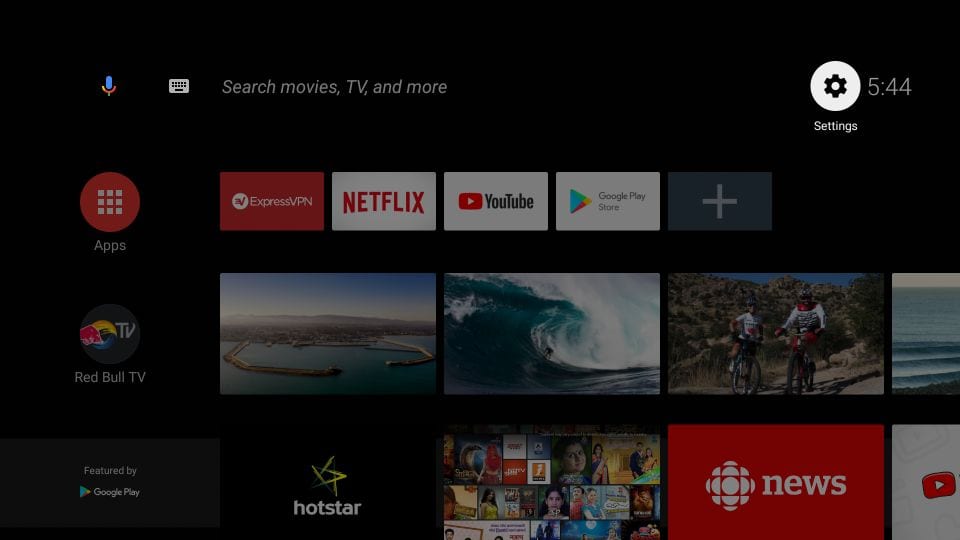 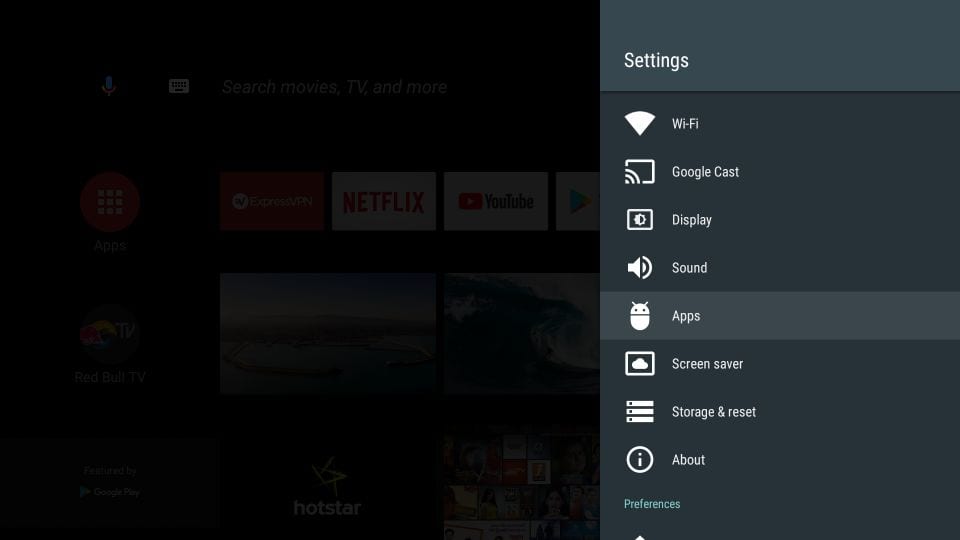 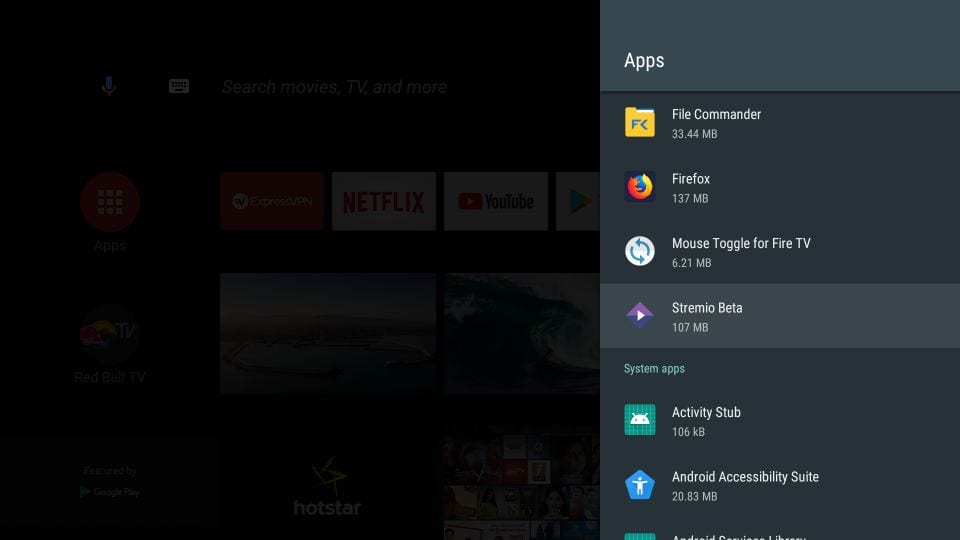 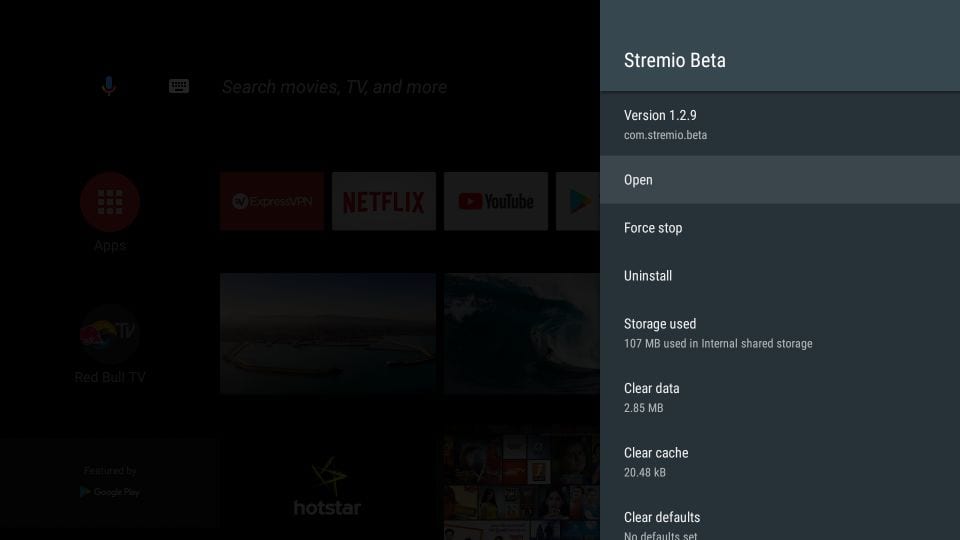 There you go! You now have Stremio installed on your Amazon FireStick or Android TV Box devices.