Roku vs Apple TV: The Ultimate Showdown. Which Should You Choose? 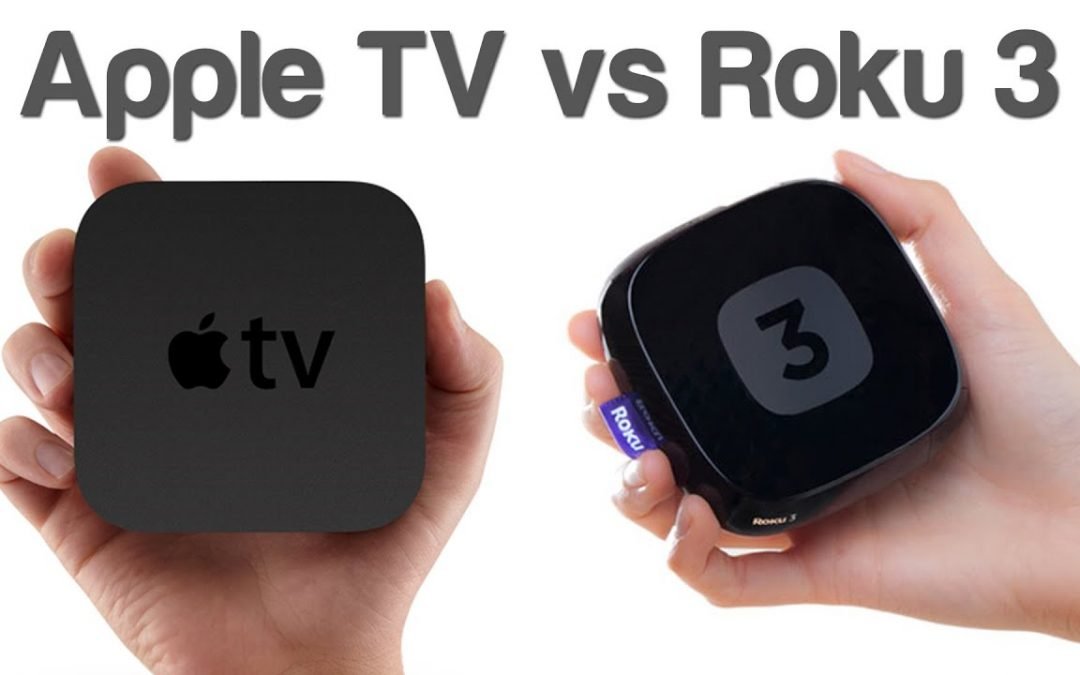 Streaming has never been smoother than it is today, thanks to a flurry of streaming devices available on the market. Roku and Apple TV are two of the most popular media players for streaming audio, video, or photos. Using these devices, users can download content from the internet or locally store media on their PC, mobile phone, or tablet and stream it to their HD TVs. But who comes out on top in Roku vs Apple TV?

Although both tools are popular with streamers, there is significant dissimilarity (apart from the noticeable price difference). We put them both head to head to find out which streaming platform is most suitable for your needs. Read on, it’s Roku Vs Apple TV!

ROKU vs Apple TV: Which Is Better?

Both ROKU and Apple TV offer somewhat similar capabilities in terms of streaming with 4k Dolby Atmos audio and HDR video. Additionally, both offer a voice search option, come with a device-specific remote controller, and the ability to use a smartphone – instead – if the remote is lost. But that’s where the similarities end. There are key differences in terms of design, remote hardware, performance, format support, connections, and of course, pricing.

In this article, we will be discussing each of these differences in detail. Continue scrolling to find out more!

Let’s face it, style matters. Both devices are designed to sit on your entertainment box. But, when placed side by side, you notice that Apple TV is more stylish because of the glossy plastic finish. It is taller and thicker but carries a significantly smaller footprint, requiring less space. In contrast, the ROKU appears cheaply built and less visually appealing. Neither of them seems too large or is at risk of being an eyesore.

However, Roku is more versatile as it adds a USB port for accessing local data and a Micro SD slot for adding more storage. Even though people may not need to add extra storage to Apple TV, it is one feature where Roku trumps the competitor.

The initial setup process for both of these devices is pretty straightforward. Simply plug in the boxes. Once the device starts up, you will be prompted to sign in or create a new account to continue.

On Roku, you will have to select the channels that you want to access, while the Apple TV will require you to download apps for streaming services. In our opinion, most users will be able to add apps and channels very easily and set up the device without any hassle. This Roku vs Apple TV category comes out to a tie.

The two primary indicators of speed and performance are RAM and the processor. In this regard, Apple TV reigns supreme. It uses a high-performance Apple A10X Fusion processor along with 3 GB of RAM to give users one of the best-performing profiles possible while streaming 4K. The results are outstanding. Apple TV is the fastest in the market. The apps load more quickly. They run faster once loaded, and we noticed no lag, sluggishness, or glitches during our trial run.

Roku, on the other hand, uses ARM Coretex A53 and 1 GB of RAM, which is also reasonably high performing but comparatively a lot less. In addition, we did notice some sluggishness during the 4k streams.

The design of the remotes used by Roku vs Apple TV is also different. Apple TV’s Siri remote has a touch-sensitive panel allowing you to swipe menus like any smartphone. While the remote trackpad is a great idea, it is not necessarily ergonomic. The playback and Siri voice-control buttons are located right beneath the touch panel. The remote itself is very sleek, small, and stylish. If you tend to lose things on the couch, watch out!

On the other hand, Roku adds extra controls, along with quick access buttons for services like Sling and Netflix, and a headphone jack. For this reason, the remote is slightly bulkier, yet also more ergonomic and comfortable to hold. In addition, you can customize these buttons and create shortcuts with your own voice. For instance, you can customize these buttons to open the apps that you use most often, or to perform a particular search.

Overall, we like the Roku remote more than the Apple TV simply because it is simple, offer more functionality, and has a more relaxed ergonomic hold.

The software design and user interface are marginally different. The sea of icons on Apple TV’s user interface is fun to navigate and appears more modern. While Apple has put a lot of thought into crafting a user-friendly and straightforward user interface, Roku gets the job done in a more traditional way with channels located on the side. It lacks intuitiveness. Plus, you may also encounter some annoying ads along the way while using Roku.

The Roku OS is busier. You will likely find yourself drawn into a content rabbit hole initially, with several options for TV shows, movies, apps, and rentals. In contrast, Apple tries to keep things neat and straightforward. It is pertinent to mention here that its TV app messily strives to aggregate all content in one place, and the results leave a lot to be desired. Lastly, the screensavers on Apple TV are some of the hauntingly beautiful aerial displays we have ever seen. In comparison, Roku has… cartoons.

In the overall experience, the user interface of Apple TV is simpler, faster, and better.

In the toss-up between Roku vs. Apple TV in terms of streaming, Apple is the clear winner because of the compatibility of various Apple devices.

Roku’s mobile application only allows for streaming photos, audio, or video files stored directly on the smartphone. By contrast, you can stream any content from your MacBook or iOS device straight to the TV. Between being able to access media files to its higher compatibility, Apple’s streaming is much more robust and advanced. Hence it makes the Apple TV ideal for office environments and other similar uses. Additionally, streaming from a computer to a Roku device is somewhat frustrating as you need to download third-party apps.

Roku houses the largest number of official streaming apps on the market, and that’s before you even start looking at private channels. It has more channels out of the box than Apple TV does overall. So if you want the sheer number of streaming options available, Roku wins out.

While most private channels on the device are a mess of outdated content, these are worth exploring as you do sometimes come across worthwhile content. Besides, Roku prioritizes free services. While searching, it ranks every result by price. Hence there is very little chance of getting sucked into paying a higher price for what you need. We’ve also already gone to the trouble of laying some of the best private Roku channels out there:

Roku Private Channels – How to Add Amazing TV to Your Roku

To beat that, Apple TV has the support of the Apple Ecosystem. The ecosystem refers to the unique advantages that come with owning an Apple device. For instance, it has an AirPlay feature that doesn’t just work from an app but from any Apple product from HomePods to Macs.

What’s more, you can even stream audio to nearby AirPlay speakers or pop in your AirPods and seamlessly switch between listening experiences. Of course, you can use any other set of Bluetooth earbuds, but the AirPods are more streamlined. Lastly, Apple TV automatically updates video purchases from the iTunes library to 4k. This means you do not need to re-purchase the same content to upgrade. Furthermore, Apple TV lets you download video games from iTunes. You can store and play them on your TV with the help of a Bluetooth remote.

You can connect an Apple TV with your television using an HDMI cable. Other ports on the device are the audio out port and an Ethernet port that allows direct connectivity with a router. Apple TV’s interactions with other devices are through (dual-band wireless-n) WiFi and Bluetooth.

Roku connects to the TV through WiFi in the same way, via an HDMI wire, but it has added input slots for Micro SD and USB. It does not have any Bluetooth connectivity option or an optical audio output port.

Usually, we don’t put a lot of weight on pricing and prefer to focus mostly on the quality of the topics we review. Nevertheless, when there’s a staggering 80+ bucks difference between Roku vs Apple TV, it becomes a consideration.

For the price of one Apple TV, you can buy one Roku and still have enough money left for a nice sushi dinner for one person or three days’ worth of your groceries.

All things considered, both of these streaming options are incredible in their own ways. Apple TV is jam-packed with Apple goodness. It offers the best 4k experience, is beautifully and simply designed, but is also costly. If money is not a problem for you and you want the best that streaming technology has to offer, or you are highly invested in Apple’s iTunes store, we recommend opting for the Apple TV.

Nonetheless, Roku’s gigantic collection of streaming channels, conventional remote control, straightforward interface, and affordable price make it a tough-to-beat competitor. We will recommend it for anyone on a budget or those who want to have access to an extensive library of streaming content – free or paid. Therefore the Roku Vs Apple TV one-on-one brawl ends in a draw. We believe both are great options in their own way. It’s all about your preferences and how much budget you can afford.

No matter which you choose, we strongly recommend getting a reliable VPN to protect your data and streaming privacy, and to keep regional licensing to keep you from watching your favorite TV shows and movies.

How to Install VPN on All Your Devices