Rain Man: What Makes This Movie So Iconic? 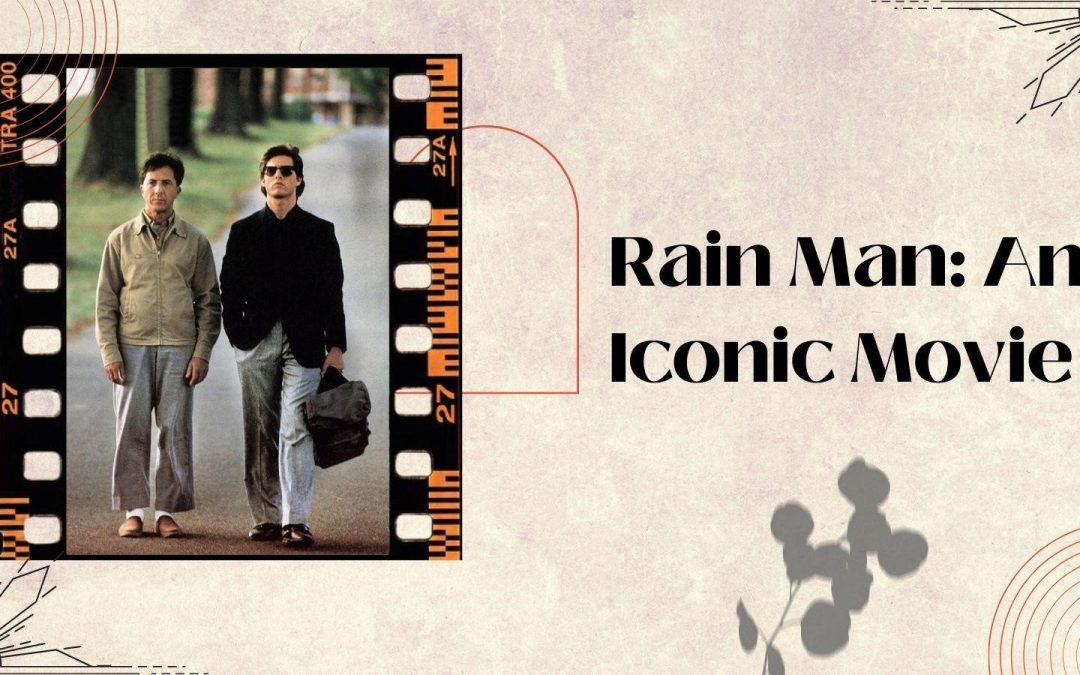 Charlie, who is in dire need of money finds that his father had left all of his fortunes to his older brother Raymond Babbitt upon his death and Charlie tries to gain the whole wealth from Raymond by acquiring the custody of him since Raymond had been in the mental institution and deemed unfit for inheriting without a guardian.

The movie follows their journey where the two brothers, initially distant due to Charlie’s cruelty grow closer to each other and learn to actually care for each other in the long run. Rain Man has been hailed as a classic and a favorite of both viewers and critics.

It had received immense praise during its release and gets love to this date. Apart from being a blockbuster hit, the movie won 4 out of 8 Academy Awards and many other prestigious awards including ones for Best Picture, Best Director, and Best Screenplay, and became the most successful movie of the year 1988.

Charlie Babbitt, a young and ambitious Lamborghini dealer meets a dead end when the cars he was dealing with were being held onto for failing the emission test. Charlie then receives the news of the death of his father and visits Cincinnati with his girlfriend Susanna in order to resolve the issue of his estate and inheritance.

He finds out that the whole estate worth $3 million was to be inherited by his older brother, Raymond Babbitt, about whom Charlie had not known about in his entire life.

Charlie visits the mental institution to find Raymond to realize that he was autistic and needed a guardian to look after him. Charlie takes him out of the institution and makes him stay in a hotel despite his doctor warning him not to.

Charlie actually intended to gain the whole inheritance by taking custody of his brother and tries to bribe Raymond’s doctor into letting him out for his own benefit to which he refused. Susanna was extremely distraught by Charlie’s behavior towards his brother and his greed for money.

Next, Charlie tries to get on Raymond’s good side by suggesting they go back to Los Angeles. Raymond, who did not want to leave was forced to go on a trip with Charlie so that they could bond. Raymond showed a desire for an orderly and appropriate life and he followed his own routine without a fault.

Charlie recognized signs of brilliance in Raymond as he could perform calculations at a speed not common to regular humans. He saw that he had abilities far superior to common people.

Meanwhile, Charlie ascertained that his brother was actually his imaginary friend from his childhood whom he called the “Rain Man”. He had assumed that this figure was probably his imagination but it was his real brother.

The two brothers were separated by their father due to a misunderstanding, where their father thought that Raymond was trying to harm Charlie when in fact, he tried to protect him from getting burnt by hot water. Raymond was sent to the mental institution soon after this incident.

Everything till this point was well but Charlie was informed that he had to remunerate his customers after the Lamborghini, leaving him in huge debt. He planned to resolve his debt by winning big in the gaming venue in Las Vegas with the help of Raymond’s abilities but they were caught and had to leave it.

Fortunately, Charlie managed to acquire money to pay off his debts and got back together with Susanna.

Back home, Raymond’s doctor tries to get rid of Charlie by giving him money but he refuses to take the money, informing him that he wants to stay on good terms with his brother. The movie ends with Raymond returning to his former life at the mental institution and Charlie making a promise to visit Raymond within two weeks.

The story of the Rain Man itself is touching and heart-warming. Paired with the undeniable presence of Dustin Hoffman and Tom Cruise, the movie becomes a classic in the world of Hollywood cinema.

The portrayal of the autistic man by Dustin Hoffman and the portrayal of a brash young man who undergoes a character redemption by Tom Cruise earned praise from all over the world. The dynamic between the two brothers was beautifully shown in the movie without any space for exaggeration.

Based on a real savant named Kim Peek, the movie captures Raymond as a human rather than an abnormal entity.

The movie raised awareness for treating autistic patients and others suffering from similar conditions with more empathy and kindness. It was the first of its kind to handle the portrayal so beautifully without making the character seem unintelligent or incapable of human emotion.

The relation between Charlie and Raymond which was initially only of benefit to one grew to be one of genuine affection. Overall, it painted a pleasant picture of familial bonds.

The emotions were one part of the movie, the other part being the world of luxury. This movie was the first of its kind to show an original gaming venue in it. The scene was deemed to be an icon by later critics and watchers of the movie. Many UK gamers that like to play outside the United Kingdom admit this movie as one that shows the real experience.

The concept of this place was that of immense attraction among that generation of that time. These gaming spots were in vogue in the late 80s, 90s and continued to do so in the 00s but the 80s and 90s saw them as the epitome of luxury and temptation.

Therefore, when Rain Man represented the original gaming place in the movie, it had garnered a lot of curiosity among the audiences. The atmosphere, lights, songs, and the enchantment of it rendered the specific scene so popular. Instead of using a fake place, Rain Man used a real one that made it possible for the viewers to partake in the glittery and flashy world of gaming.

The movie opened up the gates of the gaming spots to Hollywood. It represents them as the hub of luxury and desirable things. Rain Man showed Charlie and Raymond successfully winning big without undergoing much trouble or hassle.

This depiction of it is obviously fictional and to some extent, misleading. Gaming is not as glamorous a sport as it is often depicted in popular movie sites, this leads to a false hope of guaranteed victory while under the influence of false scenarios.

Real-life does not ensure victory and winning big at every stage of gaming, reality is often harsh and may lead to more disappointments and failure. Worse, the false depiction may lead to the habit of compulsive gaming under the influence of a strong desire to win.

Silver screen portrayals may also stimulate a sense of betrayal where a real person may end up blaming the movie for giving them hope. Hence, it is important to remember the difference between real and unreal, to avoid being swept away by all the glam around the world of operators.

Rain Man in no way has any desire to mislead so it is important for the viewers to accept it as a work of fiction.