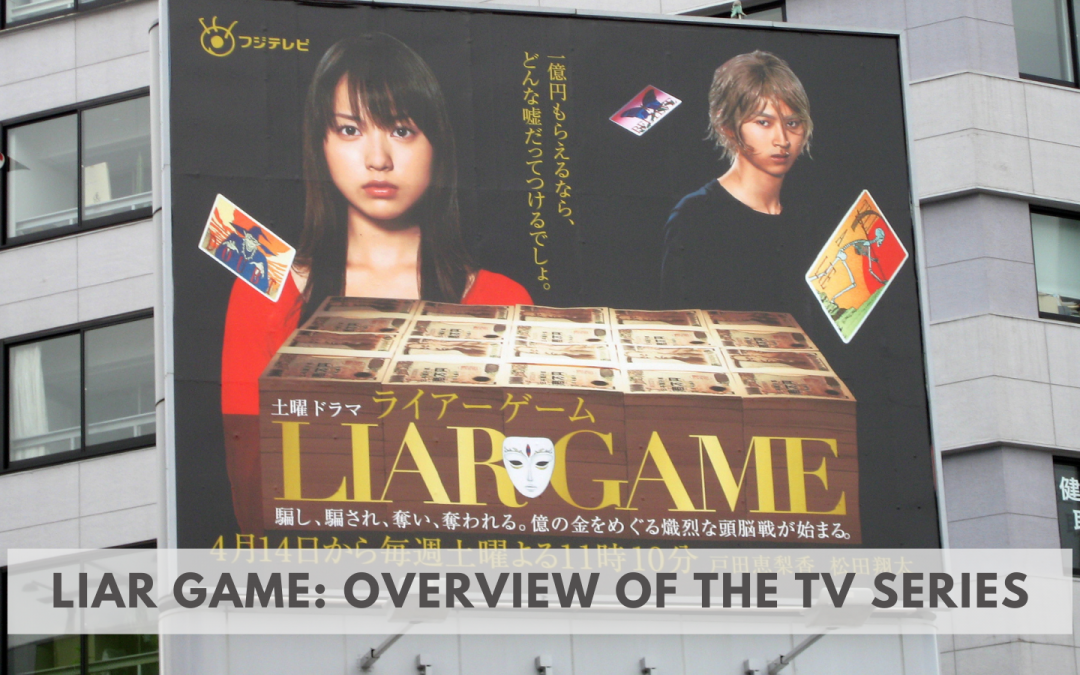 Liar Game is a 2007 psychological, thriller series directed by Hiroaki Matsuyama based on the manga of the same name, Liar Game by author Kaitani Shinobu. The series had two installments, one aired in 2007 and the other in the years 2009-2010.

A movie named Liar Game: The Final Stage was released in 2010 as the last of the installments, based on the original work. Another popular TV-series called Liar Game: Reborn was also released which had a deviation from the original manga and focused on another character in the same setting.

A South Korean adaptation of the manga was released in the year 2014 which is a shorter version of the original manga and had its own unique ending.

The Japanese series followed Nao Kanzaki, an overly honest and stereotypically naive college student who finds herself tangled up in the Liar Game, a game of deception and debt and asks for the help of a con man, Shinichi Akiyama to help her escape the game. Erika Toda stars as Nao Kanzaki while Shota Matsuda stars as Shinichi Akiyama.

The Psychology Behind Liar Game

The game was crafted to bring out the worst of human nature and turn the player’s world into a living nightmare. One term has been constantly used to describe this movie – hell. Organized and sponsored by rich, anonymous figures, the game shows the capitalistic desire to see the poor destroy each other for money.

This game is merely a source of entertainment to create perfect cheaters and liars who would step into the rotten world of the wealthy.

Nao is the only anomaly in the game; she is someone who trusts people with all her heart and believes in them despite being scorned multiple times. The only reason for her being involved in the game was to break her spirit and trust and become as deceptive as the rest of the players. Yet Nao, in spite of being called stupid continues to try to save everyone from the game.

With the help of Akiyama, Nao steps into the game to prove that any game at one of 100 operators can be won with trust and teamwork instead of betrayal and selfishness.

Nao is portrayed as the quintessential damsel in distress, making mistakes at every step she takes to the point of being seen as annoying. Akiyama has to constantly be there to help her at every step, but this was a plot point used specifically to make Nao be seen in a better light as the game proceeds. Her being extremely trusting makes the viewers sit up and feel the same anxiety as her and other players.

The tight plot with no unnecessary baggage and the carefully crafted plans of Akiyama makes up for the thrill of the show, leaving the viewers satisfied.

Nao Kanzaki, an honest and good-hearted college student receives a bag full of 100 million yen on her doorstep with an invitation to “Liar Game” with specific instructions to steal 100 million yen from her opposition in order to win the game or pay the agency the full sum of 100 million yen game, leaving her in debt. Nao gets cheated off of her money by Fujisawa, her teacher, whom she entrusted her money to.

Completely devastated, she seeks the aid of a freshly released prisoner and conman, Shinichi Akiyama to get back her stolen money. Akiyama reluctantly decides to help Nao in exchange for half her money prize to get back her money and be freed from the schemes of Liar Game.

Due to Akiyama’s devious plan, Nao manages to win the first round, earning 100 million extra while Fujisawa gets a debt of 100 million yen. Yet Nao decided not to abandon Fujisawa despite his deception and gave him her 50 million yen. Similarly, Akiyama forfeits his money claim and returns it to Nao to help Fujisawa.

Nao thought she escaped her predicament but she gets an invitation letter for the second round of Liar Game. There are only two options, either to participate or to withdraw; but there are conditions to withdraw.

The participant has to return half of the amount given to them, 50 million yen to the agency or they have to participate in the next round. Having given her winnings to Fujisawa, she had no option but to join the next round.

Although Nao tried to withdraw, she got tricked by the policeman who offered to help her and got trapped in the second round. Akiyama, who followed Nao to the venue of the second round, joined the game as a proxy in order to help her.

From that point onward, Nao and Akiyama had to encounter even more brutal and merciless people who could backstab their partners without a shred of guilt. Liar Game sees whether Nao and Akiyama can successfully break the chains of betrayal and debt and save everyone from the cruel fate bestowed by the agency.

Round 2 was a minority game where unlike the system of the majority ruling, the minority would win the game. A team game was proposed by Akiyama to ensure a win while compensating the ones who would lose by resolving their debt.

Yet there was a catch, player X who turned out to be Fukunaga was in their team and betrayed the others. Just when Nao and the others thought that they had no way out, Akiyama changed the tide and won the game. Next, a revival round was held which Nao joined to let Akiyama escape the third round.

The third round led to the revelation of Akiyama’s past which shows why he decided to save Nao from the vicious game. Yokoya, the creator of the pyramid scam which led to Akiyama’s mother’s death, had plans to take revenge on Akiyama but ultimately lost to him.

Nao’s kind and forgiving nature made Akiyama forgive Yokoya and help him pay his debts. Here, a sponsor of Liar Game is revealed and why they got someone like Nao to join the game. The season ended with things going back to normal but with the impending doom of the fourth round after which the game will turn into hell.

The shorter second season resumes two years later with the announcement of the fourth round. Nao, Akiyama, and Fukunaga are now back together as a team for the fourth round and have to play individual games to defeat their opponents, the games being 24 round Russian Roulette, 17 Poker, and Stationary Roulette.

The sun kingdom consisting of Nao, Akiyama, and Fukunaga won the round and moved to the semifinals where they were faced with an indomitable opponent, a former classmate of Akiyama and psychologist Ryou Katsuragi.

Katsuragi, being the only one to have ever defeated Akiyama, manipulative and terrifying, thought that she would defeat Akiyama again but the last half of the semifinal saw the victory of Nao and Akiyama.

The final was not shown in this season but a hint was given to the movie viewers about the hellish nature of the game. The final will see Nao and Akiyama discovering the true nature of the game and agency and trying to survive the hell they will dive into.

Liar Game is a must-watch entertaining show if one is excited by the thrill of unpredictable games and the deep-rooted secrets of shady organizations. Liar Game is perfect with its well-knitted storyline that interconnects everything and can be opened only by reaching the end. It is a show that keeps you on your toes and makes you want to see it till the end.