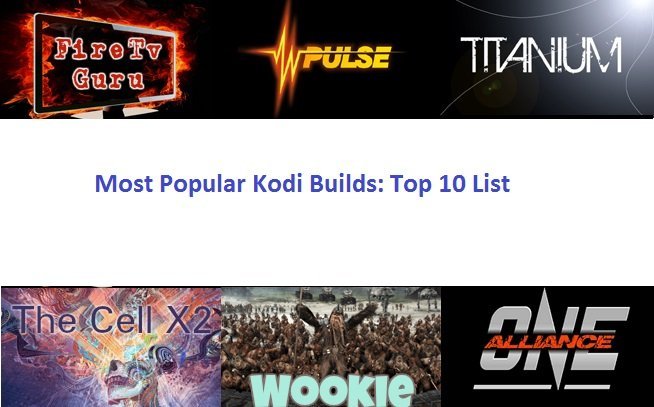 A Kodi build is an important part of the Kodi media player application. A build helps in the completion of the application and allows you to access the various features that are otherwise hidden or locked. There are several thousand Kodi builds currently available for download on the Kodi platform. However, only a few of them are helpful and fully functional.

Some of the advantages of these Kodi builds include,

Here, we shall discuss the top 10 of the most popular and functional Kodi builds currently available for download on the Kodi media player.

Fire TV Guru build for Kodi is one of the most popular Kodi builds addons. This build focuses on providing the best streaming application addons that allow you to stream live TV, videos, as well as premium movies for free.

The Fire TV Guru build is best known for providing a comprehensive list of kids tv channels and shows. It also features an intuitive navigation menu that is easy as well as fun to use.

The Cosmic Saints 4K Build is popular on Kodi too. The main reason for its popularity is its aesthetically appealing interface. You can set your interface appearance as per your likes from the wide variety of skins available as addons on this Kodi build. The Cosmic Saints 4K Build is so popular as it has support for Wizard installation over the Ares build as well as builds Krypton v17. It is one of the most popular builds since it features a wide variety of TV shows that cater to the adult population.

The Cell X2 Build is another one of the active Kodi builds that have a constant support from its developers. It is difficult to find such an effective build for Kodi now that most of the other builds are shutting down due to governmental policies. The Cell X2 Build is popular for providing an extensive network of support over a variety of devices and OS. The Cell X2 Build is currently available for download and installation via the Supreme Builds Wizard Repository.

In case you wish to install Kodi application on the Amazon Fire TV Stick, you cannot find a build better suited for the task than the Raze Reborn build. This build has a perfect compatibility with the Fire TV Stick, and almost all the different links on this build are currently active and receive regular updates from the developers. The Raze Reborn build also features an attractive and intuitive home interface. This is also one of those builds that offer the highest number of addons for the interface. If you wish to install a complete package that focuses on the video addons specifically, you can opt for the latest version of the Raze Reborn build. The build is currently available for download over various popular repositories like Agent 47 and Smash.

The Pulse CCM build recently got the necessary support over the latest Kodi application. This build was only available in the older version of Kodi i.e. Kodi 16.1 up till now. However, recently it got the update that allows the users to run it on the latest Kodi 17.3 Krypton. You can now download and install this build over the Krypton Repository.

The Pulse CCM build has good support from the developers of the build, and you can often find the necessary updates for installation and bug fixes. In case you are uncomfortable using the Krypton Repository, you can install it via the familiar Ares Wizard too.

The Wookie build does not receive as many updates as the other builds on this list. Nonetheless, it is one of the most popular builds since it is a culmination of essential addons and features that you might require to unlock the full potential of the Kodi, media player.

The Wookie build features its add-on named Wookie Flix that gives you access to premium TV shows and movies that you need to pay for otherwise on Netflix and Amazon Prime Video. It also features a dedicated section for kid’s TV shows that features several hundreds of shows over a variety of channels.

CellarDoorTV is one of the legendary builds on the Kodi platform, as it has received constant support from the developers over the past few years. One of the best features of the CellarDoorTV build is its open source nature. This allows people to develop and integrate their addons to the build to customize the entire Kodi experience.

You also get options to choose from a wide range of themes to make your interface look cooler than before. The functional animations with the trendy interface on the CellarDoorTV build allow you to navigate through the build easily without any prior set of instructions.

A unique selling point of the Ares build is its stark and minimalist interface. In case you have limited space on your Fire Stick, the Ares build is the perfect choice for you, since it occupies a relatively less storage and RAM on the device compared to other devices on this list. The Ares build is one good culmination of stark features that bring the best addons to your device.

You also get access to extended support from the developers on the Ares Project platform for all your queries and requests. One of the major reasons why you should go for the Ares build is that it features a fully functional version of the Exodus add-on. This particular add-on is among the most famous addons for the platform, and it went offline a few days ago. It is better to install the Exodus add-on over a build than a repository to get access to the necessary features on the platform.

You can find a comprehensive guide on how to install the latest Ares Wizard on your Fire TV Stick by clicking on this video link.

One Alliance is again a build that is perfect for moderate users. Just like the Ares build it too features a small package size, thereby allowing you to save the storage space on your device. You also get access to the online community, which is considered to be one of the most responsive and helpful communities on the Kodi platform.

If you are searching for a build that is quick and efficient in getting the task done without any bloated features, the One Alliance build is the perfect choice for you.

The last Kodi build to make it to our list of top Kodi builds is the Titanium build. It has an extended support on Facebook, and the developers are often quite responsive in solving the queries of the users. The only problem associated with this particular build is that you need to make a fresh install of the Kodi media player on your device before you can download and run the Titanium build.

These are the top 10 builds for Kodi media player platform that you can use on a daily basis to enhance your user experience as well as get access to the necessary Kodi 2017 addons directly.

Dont want to install several TVAddons at once by using a Kodi build?  Then simply install TVAddons one-by-one.  Installing just one TVAddon (as opposed to an entire Kodi build) can be more lightweight on your Firestick, Fire TV, or Android TV Box.