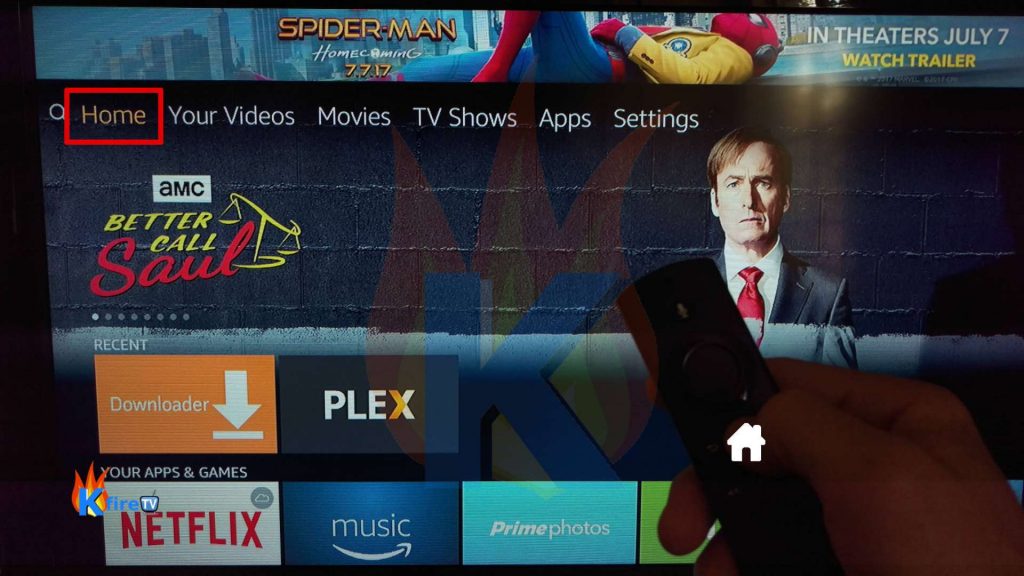 Go back to the Firestick / Fire TV home screen

The Latest and LAST Kodi Krypton (17.6) RELEASED! Get the latest and LAST version of Kodi Krypton right now at http://kodifiretvstick.com/kodi-v176-install-update/ and learn some tricks toward making future updates to Kodi on Android devices EXTREMELY EASY as well!

Now that Kodi 17.4 Official has been released, Team Kodi conveniently made a quick-download link to Install Kodi 17 FireStick (& Fire TV).  To install Kodi 17 Krypton, you simply add the “Downloader” App to your Firestick – then use Downloader to download the Kodi 17.4 apk file.  Alternatively, to install Kodi 18 Beta, scroll down to the “Kodi 18” section of this tutorial.

How to Install Kodi on Firestick

Don’t forget the last step of the process above!

Why?  Because the last step of the Kodi 17 Firestick install process sets up TV Addons on your device and secures your Internet connection permanently by using automated encryption.  Use my Kodi VPN YouTube video to set this up in just a few minutes on FireStick, Android, iPhone, PC, or any other device.  Furthermore, you should use a VPN to hide Firestick IP address (and all your other Internet) activity in general.

If you happen to have trouble with this install method (which you shouldn’t), try the Alternative method (scroll down).  Enjoy the power of Kodi 17.0 Official Release on your Fire Stick / Fire TV! (We also have download links for Kodi 16.1 Jarvis and Kodi Krypton Release Candidate 3 RC3)

The video below shows you what to do after you install Kodi 17 FireStick.  These instructions also work for Amazon Fire TV, Android TV Box, or literally any device with Kodi installed (because Kodi is the same on all operating systems, or “cross-platform”):

Use the steps in the video above to install TV Addons in Kodi Krypton using the Kodi 17 Config Wizard (which is now called the Indigo Wizard).

How to Install Kodi on Firestick (Kodi 18 BETA)

Install Kodi 18 on Firestick using the steps below

As of Saturday September 18, 2021, Kodi 18 is still in Alpha stage (you guessed it – it’s the stage before the actual Kodi Beta stage!).  But Kodi 18 Leia still works OK on Firestick – especially after you install Ares Wizard, Pulse Build, and Config Wizard on Kodi 18.

But Kodi 18 Alpha is not for beginners.  In fact, if your current Kodi setup is working for you, then don’t install Kodi 18 yet.  Wait for the developers to work out all the bug first.  Then install Kodi 18 on Firestick.

WARNING:  Kodi 18 Beta / Alpha is very unstable and may erase all of your existing Kodi data (if you are forced to Clear Data after a failed Kodi 18 install).  Only proceed if you acknowledge that you are fully aware of the consequences.

The easiest way to install Kodi 18 on Firestick is to use the steps above (for installing Kodi 17) – but enter the address http://bit.ly/k18fskfiretv instead of the address for Kodi 17 Krypton.

Use the steps above, but enter this URL:

Kodi 17 Beta 2 is not recommended, since the Final Release version of Kodi 17 Firestick (aka Krypton) is now available.  But some friends of KFireTV request it, so I’ll leave it here for now ;).

If the above steps didn’t work for you, try again from the step that says “After ES File Explorer has launched, go to Download Manager (underneath Tools)” and then follow the steps below:

Check out our Fix Kodi Not Working guide!

How to Install Kodi on Firestick (click for full-size infographic)

All things considered, Kodi 17.4 Firestick is a welcome upgrade.  Furthermore, what an improvement Kodi Krypton is over Kodi Jarvis!  Right off the bat, the dashboard home screen is very “smooth”, or has lots of fine detail.  The animations are also smooth.  Although having the Fire TV Box as opposed to Firestick does help, because the additional CPU power allows Kodi menus to animate more smoothly.

The playback and TV Addon install process was extremely fast and successful as well.  Finally, I downloaded & installed Kodi 17.  Right after that, I downloaded and installed TV Addons and was watching a movie in about 5 minutes flat.

If you have trouble with the Kodi 17 Firestick install process, then look for answers on the KFireTV website!