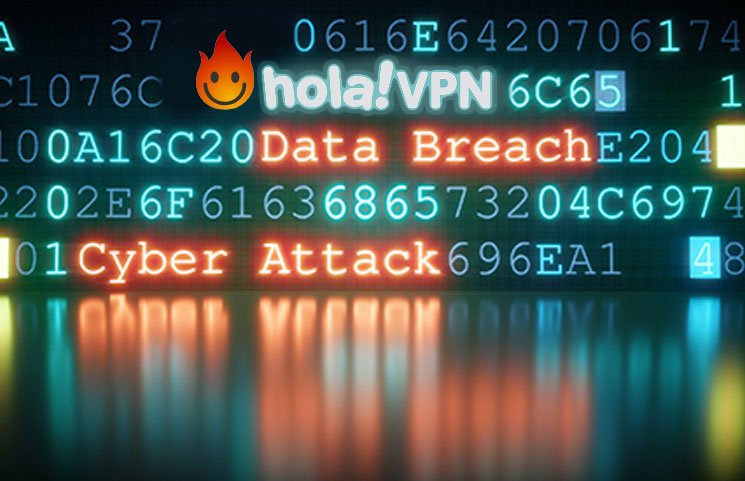 Let’s call it like it is: Free and VPN are not a good combination. Hola VPN, despite being an extremely popular service, has unfortunately illustrated this truth once again. It has been hacked multiple times and put its user’s privacy and financial information at risk. In this article, we discuss some security flaws of Hola VPN, explain why using a free VPN is a terrible idea and present a much better – and safer – alternative. Let’s talk about what led up to the “Hola VPN hacked” situation and how you can protect yourself.

So without wasting time, let’s jump right into it.

Hola VPN Hacked: Are you surprised?

Hola can’t be trusted. While the promises of free service, unlimited bandwidth ,and no ads used to market Hola VPN are quite tempting, the consequences are far more severe than you may think. And this isn’t an exaggeration. Here’s what actually happens when in a situation like the recent “Hola VPN hacked” fiasco:

It’s a Peer to Peer Network

Hola utilizes a peer to peer networking system. This essentially means you’re sharing your bandwidth with others. So, when you use Hola, you are employing someone else’s IP address. For instance, when you acquire a French IP address, your internet traffic is literally being routed through a French user’s internet connection. This is all fine and dandy, right? Until you realize that Hola VPN is using your IP Address in the same way. While this slows down your internet, slow browsing is the least of your concerns.

We’ll tell you why!

Since you’re sharing your IP address with others, you cannot control what others use it for. Hola can’t control what people do with your IP address, either. This leaves you vulnerable if there’s a Hola VPN hacked situation. Imagine someone else’s illegal activity traces back to your computer, and, before you know, law enforcement agencies are knocking at your door. And even if you can prove someone else used your IP, you will be left tangled up in a lengthy legal battle.

Second and perhaps an even more significant security flaw of Hola VPN (even aside from Hola VPN hacked) is the fact that they are selling your bandwidth through Luminati (a company they own). So, anyone can purchase and utilize this bandwidth for whatever purpose they deem fit. This isn’t a minor security concern. In 2015, 8chan founder Fredrick Brennan claimed that Hola sold their user’s bandwidth through its service Luminati to a competitor who then went on to operate botnets and DDoS attacks on his popular image board. There can be a hundred different – and justifiable – reasons for disagreeing with anonymous message boards but DDoSing the service by using unsuspecting and unconsenting users’ computers is totally unethical.

Obviously, a temporary disruption of service is no big deal most of the time. However, there’s nothing to prevent a similar kind of attack against critical facilities or government websites. Not to mention, the other illegal action that can be possibly carried out by purchasing user IP addresses from Luminati.

It’s interesting to note here that Hola’s ToS point out that you “may” become a peer in the network by signing up for the service. However, before this debacle, they did not mention this fine print, which is why the scandal surfaced in the first place. So even if you never find yourself wrapped up in a predicament like Hola VPN hacked, you can still be taken advantage and used for shady illegal activities.

Similarly, in July 2018, MyEtherWallet, a popular digital wallet service to access all cryptocurrency assets, requested its users to transfer their funds to other accounts if they had used their service with the Hola Chrome extension in the last 24 hours. For five hours, Hola VPN hacked, and user credentials were at risk of theft.

Unfortunately, these were not just a few isolated incidents. Since then, there have been innumerable incidents of Hola not taking user information seriously or using it in ways that can be compromised by third parties. You can Google “Hola VPN Hacked” and get numerous accounts detailing the company’s various offenses. What’s more, Even though the Hola VPN Chrome extension has close to 200 million users, it’s still using the same peer to peer protocol to run its infrastructure. That’s not good at all.

It’s not surprising to see Hola VPN hacked considering how approach their own security.

And… The Cherry on Top

Free Hola VPN users have no access to a VPN, and this isn’t even a joke or an exaggeration. Despite the name Hola VPN, free users don’t get access to any form of encryption to protect their internet traffic. Instead, all of their traffic is simply routed unfiltered and unencrypted through a foreign IP address (we pointed this out earlier). This way, Hola VPN acts like a simple proxy address. So why do they even call it a VPN? That’s a very good question.

Because of these serious security risks (not just because of the Hola VPN hacked fiasco), Hola VPN tops our list of VPNs to avoid. That’s quite an achievement! Therefore, whenever Hola is in the news with another “Hola VPN hacked” story, we’re not the least bit surprised anymore.

Hola VPN Hacked: Why Free VPNs are a Bad Idea

VPNs are complicated software. Making a VPN involves many variables, thus they’re expensive to make. Besides, they require a great deal of investment just to maintain their services. VPN service providers have to keep up with the ever-evolving world of security and internet privacy (or else they too end up in an Hola VPN hacked situation). How else can they do so if their service isn’t turning a profit or breaking even?

Just like any other service, free VPN providers need income to cover their costs and turn a profit in the long run. So, instead of charging users upfront, some display ads. In contrast, others generate revenue through shadier methods and tricks, such as selling your data or using your bandwidth. In essence, they use YOU to make money. As the saying goes, “If you’re not paying for the product, then you are the product.” These techniques are not only dishonest but ultimately betray the fundamental purpose of a VPN by compromising user privacy.

Furthermore, Free VPNs slow down your internet connection. They offer limited bandwidth and have limited resources at their disposal. These limitations frequently mean that you can’t browse from any location in the world you might want. That is why paying a few bucks for a premium VPN service is much better than paying third parties with your private data using so-called free VPNs.

So what’s the best alternative to keep you from being embroiled in an Hola VPN hacked conundrum of your own, then? You may ask, and the answer to this question is… drum roll… IPVanish!

What’s IPVanish, and How is it Better Than a Free VPN Service

IPVanish is a premium (and paid) VPN service provider based in the United States. It is the best choice for safely browsing the internet anywhere due to dozens of encrypted servers spread in more than 60 countries. Its robust infrastructure and reliable security protocols make it virtually impossible to track your online activity. Plus, it follows a strict zero-logs policy, which means they don’t keep any record of your activity. Sometimes even the premium VPN services keep user records in the form of various user credentials. But, not IPVanish!

If they’re not keeping logs of your activity, then your information can’t be sold or compromised in a situation like Hola VPN hacked.

As soon as you connect to the IPVanish network, your real IP address gets masked by a different IP address. Therefore no one can trace your real IP address. This premium VPN provides unlimited downloads and video streams. There are no limitations. No hidden techniques to force you into giving any private information. What’s more, users can choose from different security protocols like IPSec, Open VPN, PPTP, etc as per their needs.

The company has servers in more than 75 locations around the world. This means you can browse the internet by using an IP address from a large number of countries. Besides, the connection remains stable throughout the session. Compared to Hola’s peer to peer network VPN service, IPVanish offers a speed and bandwidth optimized network with solid security protocols in place. That is why it is recommended by security professionals all over the world.

Not many people know that VPNs are a great hack that allows you to get extra free content without ever having to jailbreak your Firestick or download 3rd party free streaming apps. You can get free, blocked content on paid streaming apps like Netflix, HBO Max, Hulu, and YouTube that is currently being kept from you!

Paid subscription streaming sites will block certain content depending on where you are. Downloading a VPN like IPVanish will allow you to trick streaming services into thinking that you’re streaming from different regions, thus unlocking region-blocked content! If you’re paying for a service, we think you should get everything that the service offers.

In fact, there are tons of great benefits of using a VPN (especially one that’s not susceptible to a Hola VPN hacked repeat) that most people don’t know about. If this sounds like it would improve your streaming life (and it’s definitely improved ours), use our link to get our reader discount on the best, most reliable VPN available.

How to get IPVanish for Shudder TV on Firestick

Hola VPN hacked is hardly surprising news anymore, considering all the security flaws of its infrastructure. More scandals like the 8Chan episode are on the horizon as long as Hola management makes no serious changes in how their free service operates. Of course, free services are tempting. More and more people continue to join the free peer to peer network, and unfortunately are surprised every time news another Hola VPN hacked scandal occurs and they find that they have become the product.

To avoid such circumstances, we recommend paying a small subscription fee to a premium VPN service like IPVanish. It’s a reliable VPN company that has been providing premium services to its customers for decades without any scandals or data leaks. It doesn’t slow down your internet connection. Most importantly, it doesn’t sell your data to third parties. In fact, because of its strict zero-logs policy, it doesn’t even keep any record of your activity on its servers.

Whether you decide to continue living in the bubble or make a wise choice is entirely up to you. We hope you enjoyed reading this article. If not, you can let us know in the comments section down below. That’s all for today. Thank you for reading about Hola VPN hacked!