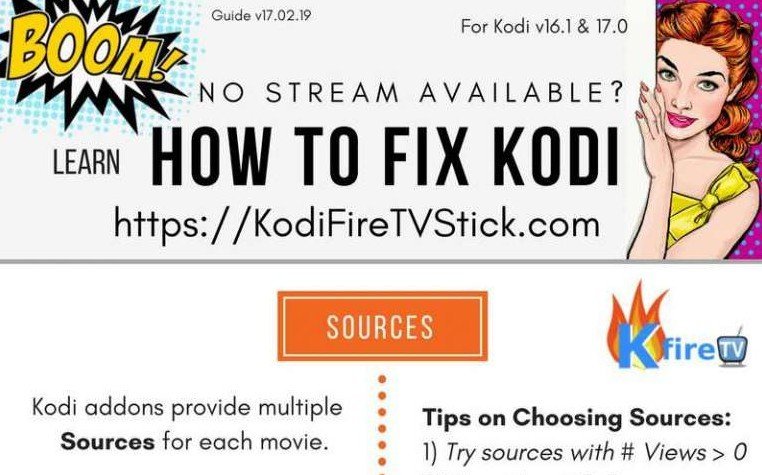 It occurred to me recently that most people I know, who use Kodi, don’t know the right way to troubleshoot or fix Kodi No stream available errors (or any Kodi playback error for that matter!).  So I scribbled out the “layers of Kodi” on a piece of paper to visualize how Kodi works so that I – and others – could fix it in the least amount of time as possible.

We also include a “Fix Kodi CHECKLIST” (subscribe to our email list at the bottom of this page for this) so you can cross things out as you eliminate them from your list of things that could be causing your Kodi not to work right.

“I got 99 problems but a Kodi No Stream Available error message ain’t one.” – KFire TV Admin

This Kodi info graphic should help you fix Kodi when it’s broken – and more importantly, educate you on how to troubleshoot Kodi, how Kodi works, how to have a “plan B” for when the streaming hits the fan, and how you can become a master at getting Kodi to work:

How Does Kodi Work?

This is how Kodi works:

This can all be a little too much for some people, as far as remembering where you’re at in the menus and “what’s what” in Kodi.  But understanding this process (and the reverse of this process) is essential to fixing Kodi.

So if you still don’t know how to 100% fix Kodi No Stream Available issues, then keep reading; we de-mystify it for you and show you how to OWN your Kodi.  We have broken down the “layers” or “levels” of activity that need to happen in order for Kodi to actually play streaming media for you.

So check out each layer below to understand what’s really going on so you can fix Kodi No Stream Available error FAST!:

How to Fix Kodi No Stream Available (on Every Level)

On the Sources level, we have the different Sources from which you can stream media in Kodi.  Depending on which TV Addon you’re using, you will have a different number and variety of Sources for each movie or TV show.  If several sources aren’t working for a particular movie / TV show, try a different movie.  Then try a different TV Addon.  If multiple TV Addons don’t fix Kodi No Stream Available errors, you can try to re-install TV Addons one-by-one, or re-install many TV Addons all at once by installing a Kodi Build such as the Config Wizard or Beast Build.

The “Media” level is simply the Movie or TV Show or Live TV channel you’re trying to watch.  If you try to watch a movie, for example, and none of the sources work – then try a different movie.  There’s a good chance that all of the sources for a particular movie may currently be offline.  This is not a typical scenario, but is known to happen.  So make sure to try a different movie using the same TV Addon first.  If that doesn’t work, then try using a different TV Addon and work “back up” through the Levels to troubleshoot each level one-by-one and eliminate possible causes to fix Kodi No Stream Available errors.

For users of Netflix, Crackle, and other “corporate-backed” streaming services, the “Plugin” level is a non-issue because those apps don’t really use plugins.  But for (haha – “butt-for”) Kodi users, this is an all-too-common point of failure.  Plugins in Kodi are known as TV Addons, or (confusingly) “apps”.

If a Kodi plugin isn’t working for you, the easiest thing to do to start troubleshooting is to try a different Kodi plugin.

For Kodi users, this is one of the most common – yet easiest – things you can fix.  The Kodi app can become bogged down with extra files if you install TV Addons and several other third party Kodi components.  In this case, you should clear out Kodi (aka Fresh Start / Factory Reset) to freshen it up and bring it back to like-new condition.

The Network level, or “WiFi level”, is another very common point of failure for Kodi streaming playback.  Be absolutely certain that..

A) Your device has a STRONG connection to your WiFi network.  If not, get the WiFi repeater ($20) we recommend and show you how to set up.  This will “repeat” your WiFi network signal to boost the strength, which usually gives better performance and fewer failures in Kodi.

B) Make sure your FireStick or other device is not being interfered with electro-magnetically.  Electromagnetic Interference (EMI) is a common killer of WiFi signals, particularly from large-screen LED / LCD TV’s.  Those babies put off quite a bit of EMI.  Also, if you have several other devices putting off their own signals, it could interfere with your Kodi device’s signal to the network.

This is the top-most level of Kodi streaming.  At the Device level are any and all Kodi-enabled devices, including but not limited to:

If your Kodi movies / TV shows aren’t playing, it could be because of a failure at the Device level.  The most common failures at the Device level occur with overheating and other physical issues.  To fix overheating, place a small fan next to your device. Also, sometimes your devices memory can run low and case poor performance / “No stream available” error messages.

In that case, reset the device to factory default settings to get a clean slate.

How to Fix Kodi CHECKLIST: