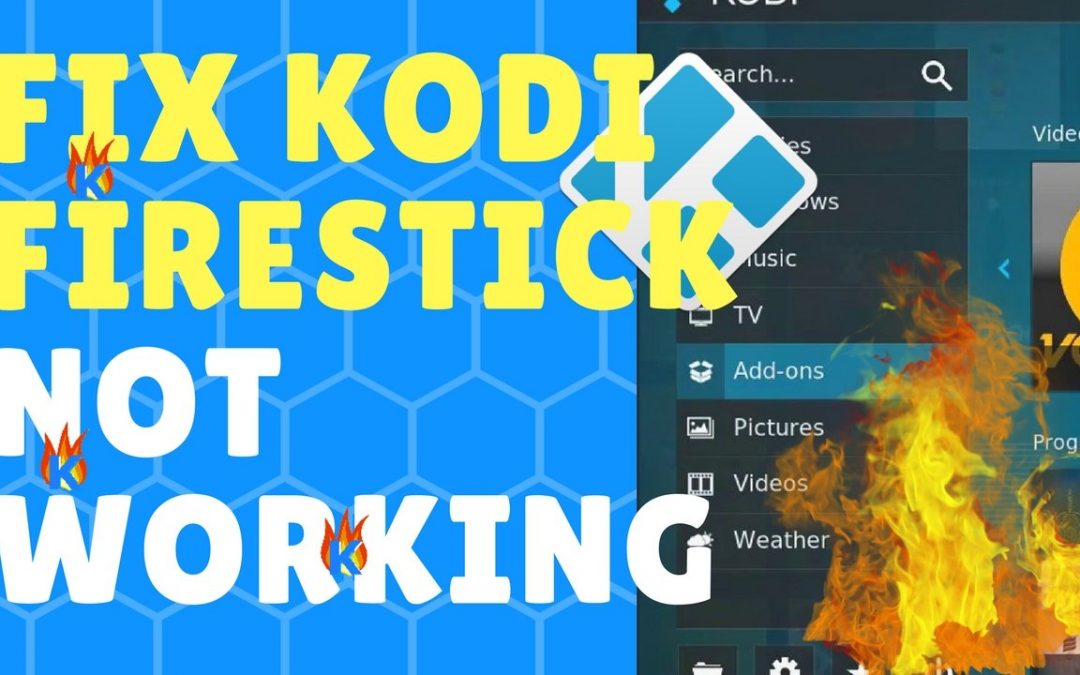 Fix it now!  We cover the following Kodi fixes in this How-To Fix FireStick tutorial:

Scroll down to see the full list of solutions to fix Kodi / FireStick not working:

What is the Most Common Problem & Solution for Kodi Fire Stick Not Working?

PROBLEM:  Usually when Kodi stops working on your Fire Stick, it means Team Kodi released an update and TVAddons no longer runs properly on your now out-of-date version of Kodi.

SOLUTION:  To fix this, re-install Kodi and re-install TV Addons on your streaming Amazon FireStick.

+ RECOMMENDED:  Your ISP is probably blocking many Kodi addons.  Get around it by using a Kodi VPN.

Before You Start Troubleshooting with our Fire Stick Kodi Solutions..

The solutions below specifically address a variety of software and hardware issues that your Kodi Amazon Fire TV is most likely facing.  Most common causes of Fire Stick Amazon failure are software errors related to your Kodi installation.

BUT – there is a very good chance that your Internet Service Provider is actually throttling your bandwidth.  Bandwidth throttling most commonly occurs to residents of the U.S. (United States) and U.K. (United Kingdom).  To prevent bandwidth throttling, hide your traffic with an encrypted VPN (which is easy to set up)

If bandwidth throttling is not an issue for you, then proceed with the rest of this guide.

What Exactly Am I Getting Into Here?

The list of Kodi FireStick fixes (below) are simple to do.  In about 15 minutes you can completely re-install Kodi and all the best TV Addons.  Feel free to use my “Kodi 17 FireStick + Config Wizard” video tutorial here:

As my YouTube tutorial video (above) clearly shows, simply re-install Kodi to fix the most common Kodi / XBMC errors.  Do this just the same way you first installed Kodi, or use our 2017 updated Kodi FireStick guide.

It’s also common for your FireStick to have a more physical problem, like your Amazon fire stick overheating or losing a network signal!

Either way, get Kodi working again with a re-install of Kodi, a USB fan, or a new WiFi router (depending on what’s causing your issue – you may need more than 1!).

So keep reading to see how to fix the Amazon Fire TV stick:

How to Fix “Fire Stick Kodi Not Working”

Possible Causes for Your Fire Stick Not Working and SOLUTIONS for Each:

The list below shows you the most common causes for your Fire Stick not working.  Below the title for each are the instructions to fix the problem.

Psst.. Believe it or not, Scenario #1 below is most likely your issue!

Scenario #1:  Your Fire TV Stick is overheating.  This is VERY common.  Get a small fan and plug it in pointing at your FireStick.

The Amazon FireStick has quite a bit of power for its small size.  Therefore, the Fire Stick generates a lot of heat and has no active heat dispersion method like air-cooling.  So do it yourself!

This should cool the little guy down so you can stream movies for hours without your Fire Stick Kodi not working due to overheating!

If you’re not sure whether your fire stick is overheating or not, then touch it.  If it feels hot, then it’s overheating.

Scenario #2:  Your Internet Service Provider is blocking your Kodi streams and/or throttling your streaming bandwidth

Many ISPs (Internet Service Providers) actually limit the amount of Kodi streaming data they allow their users to receive.  Fortunately, there’s an easy fix:  just use a Kodi VPN!  Watch the video tutorial I made (below) that shows you step-by-step how to set up Kodi VPN service.  Then take 60% Off (for KFire TV visitors only) the cost of the VPN:

Using a VPN completely encrypts all of your sent and received Internet data.  Therefore, your Kodi streams will be totally un-viewable by any and all third parties (including your own ISP).

So use my Kodi VPN setup video to set the VPN up on your devices.  Then enjoy total privacy, security, and anonymity while browsing.

Scenario #3:  The Kodi app sometimes experiences a glitch or some other problem.  Re-Install Kodi and TVAddons to try and fix it.

How Do I Re-Install Kodi?

Uninstall then reinstall Kodi on Amazon FireStick using these steps:

Scenario #4:  Your Fire Stick is losing its connection to the network.

Buy a new router for stronger WiFi to your Fire Stick

Fire TV losing network connectivity is a very common cause for your Fire Stick Kodi not working.  Basically, the WiFi in the FireStick is only so good.  And it has a limited range.

So there you have it – the three most common causes for your Fire Stick Kodi not working issues.

Try these fixes and let us know if you have any suggestions on our Facebook page :). 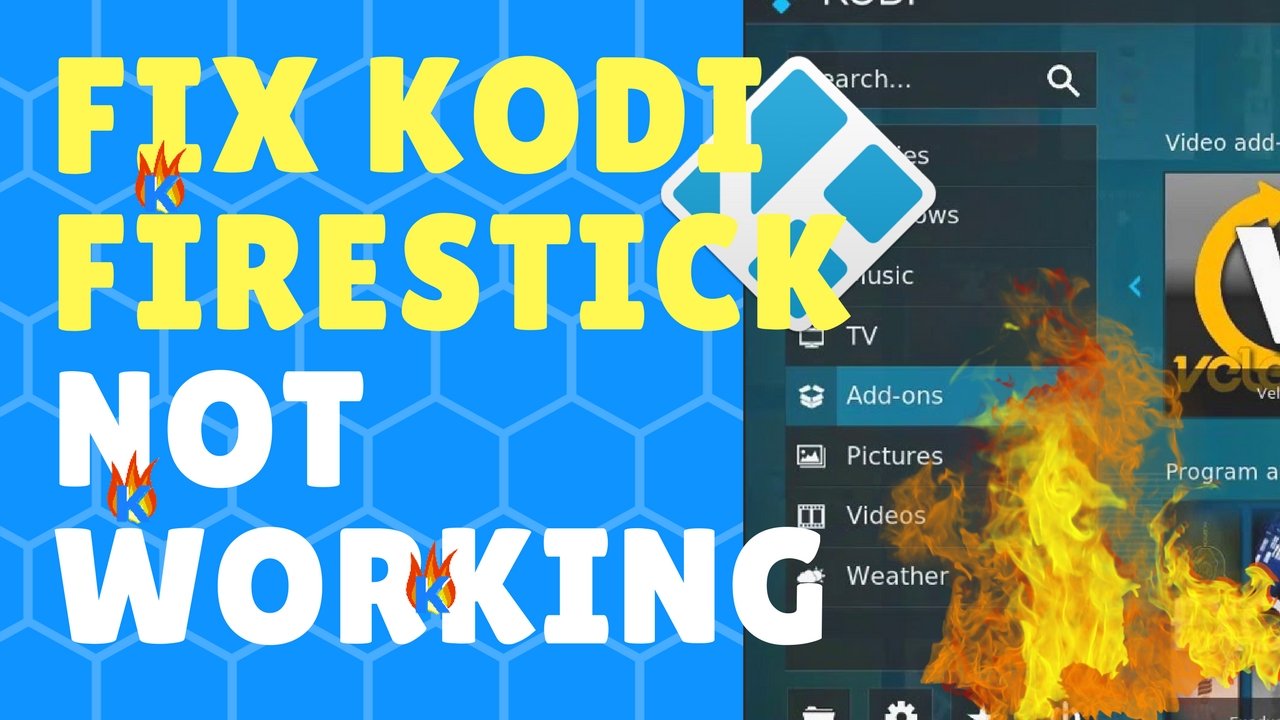 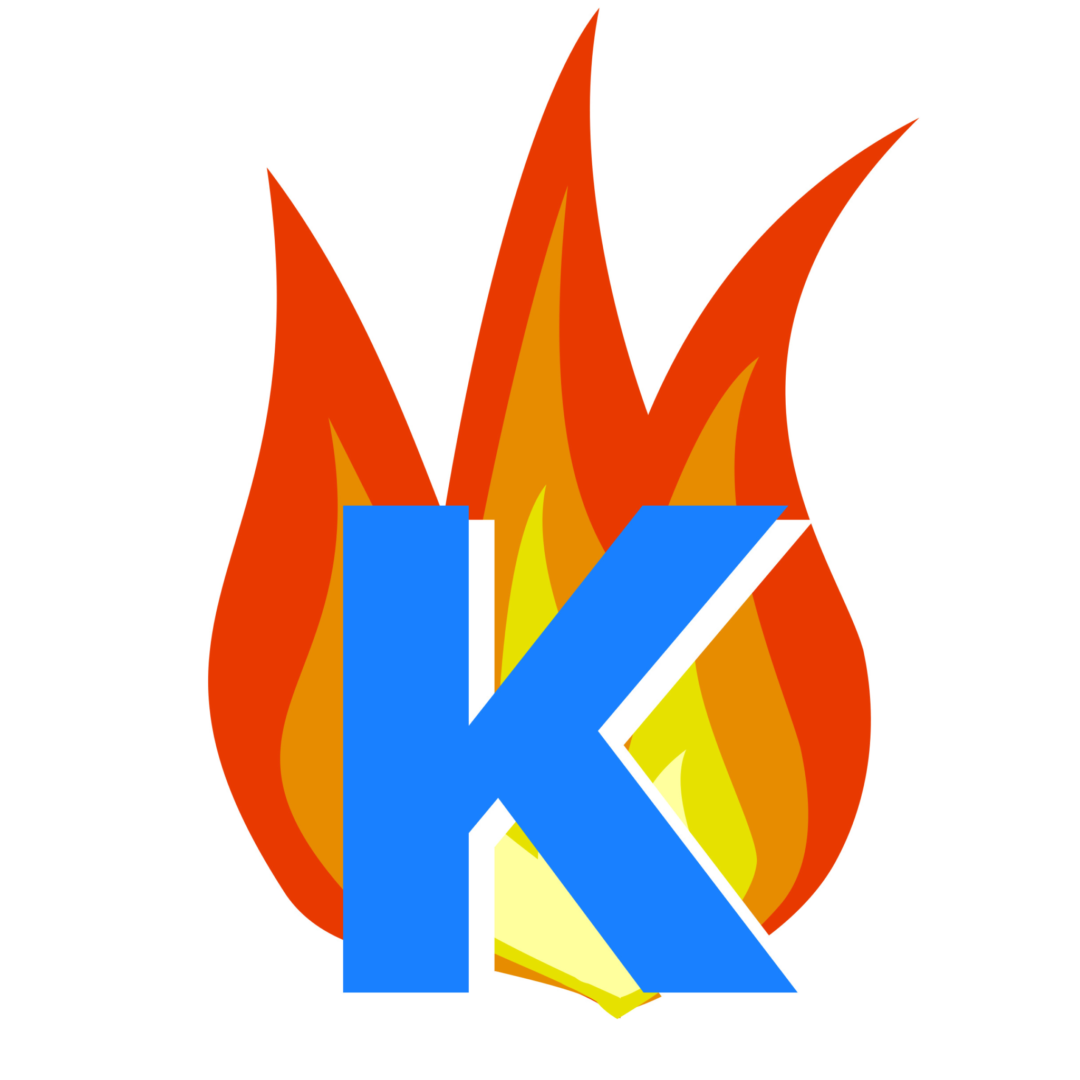