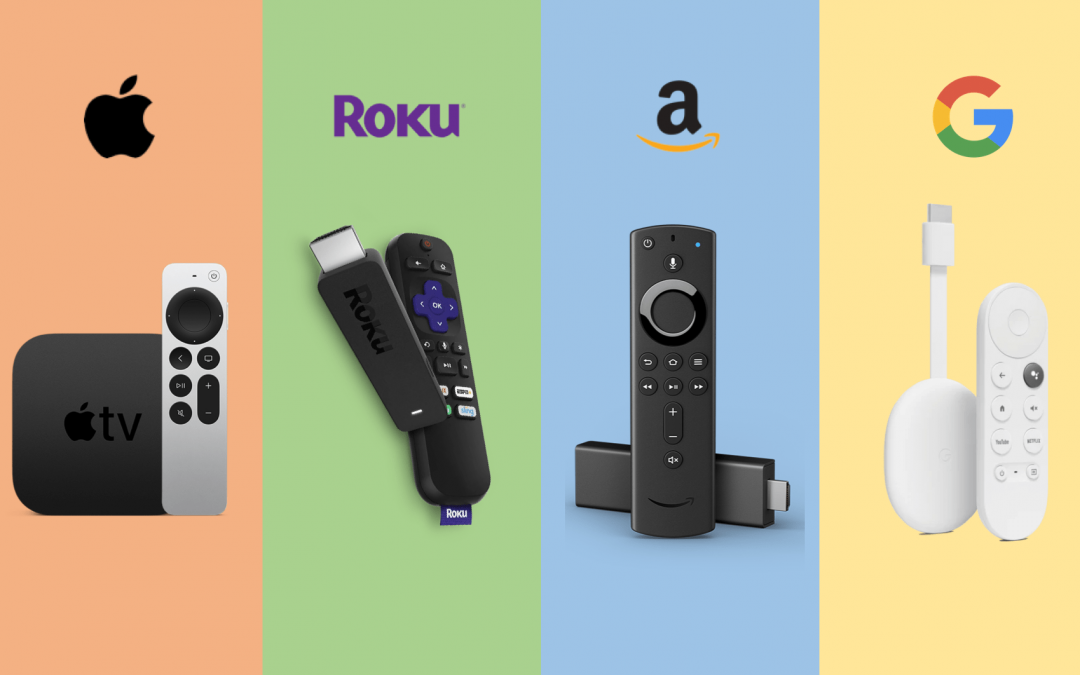 Firestick vs Roku vs Chromecast vs Apple TV is a dilemma we often encounter when choosing a streaming device. It can be quite daunting because long gone are the days where there were only two streaming options to choose from.

Now there are countless brand and their iterations to grapple with.

From Apple TV and its higher-resolution brother Apple TV 4K to Chromecast with Google TV and a whole load of Roku Express streaming services, there is a lot of crowd in the streaming market. Oh, wait, how can we forget Amazon’s Fire TV range.

Choosing the best device that complements your streaming app can be daunting. You can easily get confused between these if you don’t know what features each of these behold. They might look similar to one another. However, they have differing preferential features installed, making one of them far more suitable for you than the other.

But don’t worry, you are not the only one baffled; between these similar yet polar devices. There are millions of consumers out there who face the same difficulty as you when opting for the best-fit streaming device.

Luckily for you and them, we are here to make the decision smooth and easy for you.

Firestick vs Roku vs Chromecast vs Apple TV

We have dissected each of the top four streaming devices and jotted their features. We have also compared them so that you can make a well-informed decision when it comes to picking one over another!

Firestick And Its Offering

We begin our streaming journey with the best. And it is none other than “the Fire stick’. It is not only the best budget choice, but it is also perfect for sideloading.

Owned by Amazon, Firestick is the first choice of 40 million consumers worldwide. It is a  streaming platform that is hard to beat as it offers a plethora of features along with ease of use and reasonable pricing.

In addition, the sheer amount of apps you can watch on it, such as Netflix, Prime Videos, and its easy navigation, has made it a popular choice.

Plus, it also gives you an even more budget-friendly option, Fire TV Stick Lite, which gives 1080p resolution instead of 4K streaming, like its advanced sibling Fire TV Stick 4K Max.

Here are its pros and cons

Roku And Its Offering

Since its release in 2008, Roku has taken over the streaming market and has become a favorite streaming option for many. It offers a variety of sticks you can opt for, and their latest 4K streaming stick is the best value for money device for many consumers.

It is very similar to Amazon’s Firestick, and that’s why it is its biggest competitor.

You will find Compare Firestick to Roku and the difference between Roku and Firestick, Roku vs Firestick, top searches on Google. The competition between the two has been severe as Roku is the best Firestick alternative. So here are some queries we will resolve before moving on to our next device, Chromecast.

Can You Use A Firestick On A Roku TV?

Yes, you can use Firestick on Roku TV with an HDMI port. You can connect Firestick to a Roku TV inbuilt and then manually switch the inputs to gain access.

Can You Use Roku And Firestick On The Same TV?

As long as the TV in question has two HDMI ports, then yes, you can use both. Just plug the FireStick and Roku Streaming Stick in separate ports and shuffle between the two devices by manually changing the sources.

Chromecast And Its Offering

Google Chromecast has transitioned from being a mere casting device to a full-fledge streaming tool. If you own a smart home setup with Google Devices, then Chromecast is the best option for you.

Not only does it fit into its Google system with ease, but you get an additional benefit of built-in Google assistant. Moreover, it is extremely responsive too. Apart from its excellent performance, it is the nicest looking remote out of the lot. All of this combined has given it the third spot in

Firestick vs Roku vs Chromecast vs Apple TV comparison.

Have a look at some of its features and drawbacks:

Many people ask us to compare Firestick And Chromecast because both of them are fairly similar in terms of features and looks. But there are some differences. Have a look at them:

What is the difference between Chromecast and Firestick?

Firestick is a dedicated remote, while Chromecast is a built-in technology that lets you stream from your phone, laptop, or tablet.

In terms of content, Chromecast offers more flexibility, but firestick wins the show when it comes to interface and price.

Although the Firestick now does support Chromecast, it is still not fully integrated. So you will require a few extra steps to mirror properly.

Yes, you can connect Chromecast and Firestick on the same TV. All you require is an additional USB power source to power one of them.

Apple TV And Its Offering

Apple’s first 4K streaming deice was released in 2017, and they have been fairly successful in the streaming industry since then. Their Apple TV platform has a lot to offer and is one of the biggest competitors of Firestick. That is why when comparing top streaming brands Firestick vs Roku vs Chromecast vs Apple TV, the Apple platform holds a solid place.

People that already use Apple products will find this TV quite handy due to quick integration. There are other features to this ultimate streaming box along with some downsides such as:

Difference between Apple TV and Firestick

Apple TV versus Firestick is also a frequently made comparison because both of these devices have pretty similar specifications. But Firestick holds an edge over Apple TV when it comes to video. However, in terms of audio, Apple TV takes the lead.

Is Firestick Better Than Apple TV?

Yes. The FireStick 4K gives you as many features as Apple TV while saving $130.  Apple TV though more advanced, is pretty expensive, while Firestick is both affordable and pretty efficient

Which Will Suit Me More?

When selecting between Firestick vs Roku vs Chromecast vs Apple TV, remember there is no one-size-fits-all. All of them are worthy in their aspect. They all offer amazing services. However, the one that will suit you will depend on your budget, quality, and the amount of integration required!

What Is The Best Firestick To Buy

Amazon offers 3 FireSticks options, and all of them are powerful and under $50. For example, the latest FireStick 4K is for $49.99 and is best for high-resolution 4k streaming services. Then there are affordable options like standard Fire-Stick and FireStick Lite that offer similar performance but with less control.

What More To Consider Before Buying A Device To Stream Content

Before choosing between Firestick vs Roku vs Chromecast vs Apple TV, it is worth considering what you already have. For example, if you own Alexa speakers, then there is nothing better than Firesticks. On the other hand, if you are an iPhone user, Apple devices should be your go-to, and if your home is Google-smart, then Chromecast will fit nicely.

We hope this extensive guide helped you in choosing the streaming player that is right for you.

Remember, don’t go for the cheapest!

Be it Firestick vs Roku vs Chromecast vs Apple TV, all of these platforms offer streamers for $50 or less.

The price difference is not substantial, but some features are quite different. So consider ease-of-use, overall performance, and content catalog size before making the final decision.