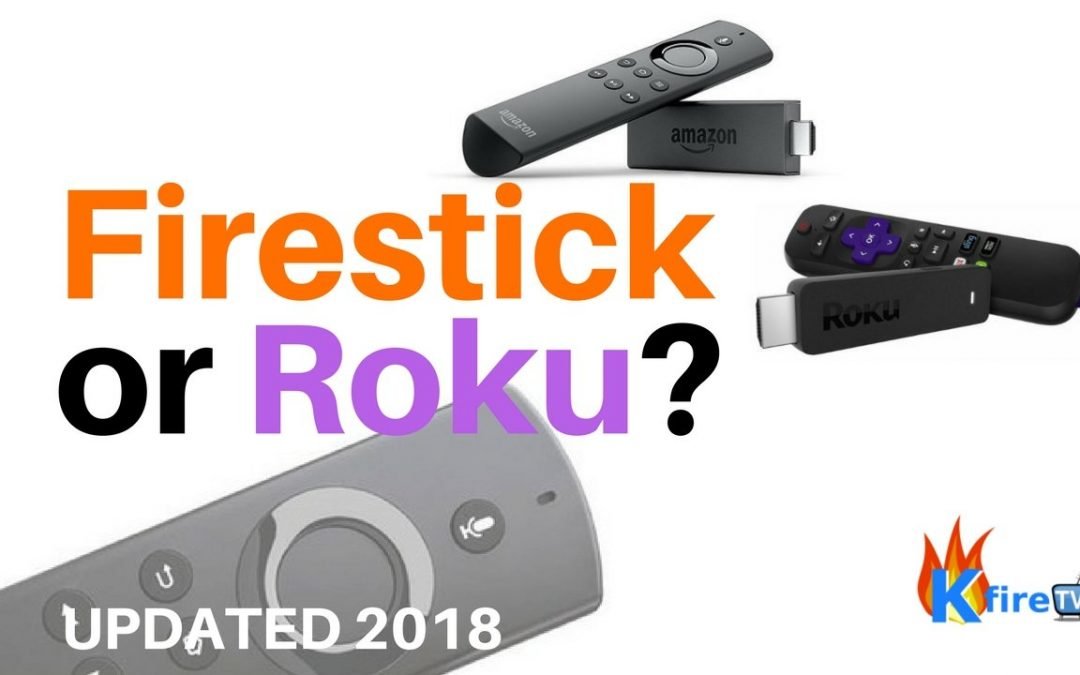 If you want to stream content wirelessly from your mobile phone, there are dozens of options to choose from. One question many consumers will find themselves asking this year is Firestick or Roku? They are two of the most popular alternatives along with the Google Chromecast, and each device has its quirks.

We’re going to break down the key differences between the Amazon Fire TV stick and the Roku, a streaming device that ruled the roost until recently. Both gadgets share far more similarities than differences although there is one key factor that is certain to affect your buying decision.  So – what’s the call: Firestick or Roku?

What is a Streaming Stick?

Before you can choose between Amazon’s streaming device and the Roku, you should first understand what they do. While plenty of commercials show media being blasted to your television, they don’t really do a good job of explaining things which can lead to customer confusion.

Streaming sticks take video from a service or source and stream it to your TV screen wirelessly through your internet connection. They aren’t designed to work with 4G although there are workaround. They are also a great way to make a “dumb” TV smart as long as you have an HDMI port and a power source.

We’re going to take a quick look at the specs on both devices. While Roku has several streaming sticks in their arsenal, were going with the newest model currently available.

Not too shabby, but they leave a lot on the table and don’t go nearly as deep as our next option. Amazon also has a couple of models on the market, but we are only interested in their base HD model this time around.

Design & Ease of Use

For even the most experienced techie, networking can be an absolute nightmare. This is the case for Firestick or Roku media players.  The basics are always the same, but your household and the way your Wi-Fi is setup directly affects your streaming experience.

When it comes to ease of use, it’s a mixed bag. Both are easy to setup as long as your network is solid and have a powered port or wall socket handy. With the Roku Streaming Stick, there are a multiple sticks, but it’s straightforward on the  Roku 3600 as you can see in the video below.

Depending on your TV and where the ports are, the Fire TV Stick may be trickier to get going. You could also need to take additional steps if you want to use Alexa skills. Powering the device can be difficult to wrap your head around as well due to some conflicting information.

Amazon wants you to use the wall adapter and insists that you do so if you want a properly powered connection. Well, if you have a USB port on your TV you may be able to forgo that cord if it has enough juice.

Older models may not be powerful enough, which means you’ll need to turn to the wall socket. Alternatively, you may also be able to pick up a special USB power cable which is built to boost the total output of your USB port.

If you have to go with a power cord, here’s a quick tip – consider the cable length beforehand. Nobody wants to see an unsightly mess behind your entertainment system when you sit down to stream your favorite TV shows.

As for the UI, that is a matter of preference. Some people may prefer Amazon’s interface while others might dig menus on the Roku. For what it’s worth, we feel Amazon has a much cleaner and intuitive interface although it is not as customizable as the Roku OS. The latter allows you to adjust the “tiles” while Amazon’s interfaced is fixed. 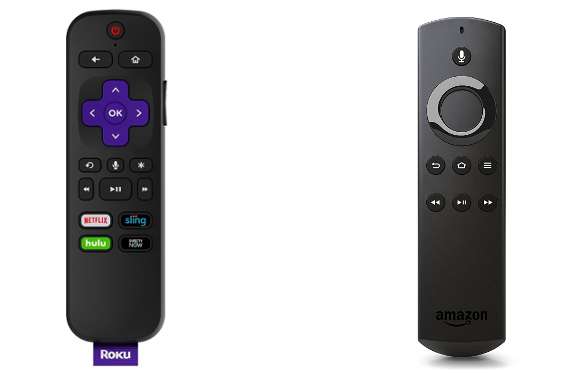 The Roku remote feels good in the hand and has improved significantly over the years. The newest models have a traditional d-pad along with a few dedicated buttons for Hulu, Sling, and Netflix. It has a voice search button as well which allows you to pull up your favorites without digging through the menus.

If you happen to lose your remote, you can download the Roku app to control your streaming stick. While it’s not a standout feature, it is handy to have on hand.  For me, this is one of the deciding factors in choosing between Firestick or Roku.  Why?  Because I know if I lose my Firestick remote, I can use an app on my iPhone / Android smartphone to replace my Fire TV remote.

If you want something a little sleeker, you may prefer the Fire TV Stick remote. Amazon’s remote has a navigational ring and a series of buttons for controlling playback of movies or music. There is a button at the top that activates voice commands. It also allows you to interact with Alexa if you have one of the company’s connected devices in your home.

Want to turn off the lights when you start a flick? You can do it all with their slick little remote. Game, set, match…

Content will be the deciding factor for most consumers and Roku takes the lead in this department in one regard. That would be free content as Roku allows you to add dozens of unique streams through their channel store.

The usual suspects are present like ABC News, Tubi, The CW and Pluto TV along with plenty of oddballs and heavy hitters like Netflix, HBO GO, and Amazon Prime Video. You can also obtain streaming video from Google Play Movies, something you cannot do on the Fire TV stick. Well, you can but not without pulling off a few tech tricks.

Inside Amazon’s walled garden of media, you’ll find a similar selection and all the major services are represented aside from Google. All your content from Amazon’s cloud will be at the ready. No surprises, and the same providers are generally available on both sides of the fence.

One key difference between Firestick or Roku, however, is KODI. This little app opens the doors to some interesting opportunities on your Firestick. This is the main feature that Roku doesn’t have: the ability to install Kodi directly on the device.

What is Kodi?  Kodi allows you to use applications like Terrarium TV and Showbox, but is not something beginners can tackle without a little help. If you’re interested, here’s a quick tutorial that will show you the ropes.

One area where there is a clear winner in our Firestick or Roku debate would be the gaming department. The remote controls on both units allow you to game when you’re not streaming media. You will find plenty of free games to stream to your flat screen including some popular hits.

Unfortunately, you’re only going to find those on Amazon. League of Evil, Flappy Birds, Beach Buggy Racing and Tetris are available along with a slew of games from the Sonic the Hedgehog franchise. Not all are free streaming games, but there is a solid selection all-around.

With the Roku, you will get a lot of free titles, but the highlights would be Video Poker or things like Checkers or Ping Pong. There are no premium games, and you won’t find any top-tier titles in their lineup at this time.

If you’re asking yourself whether you need a Firestick or Roku, you should also top to think about the future which is 4K streaming.

While AV aficionados fight over Dolby Vision and HDR, the rest of the world is trying to decide if 4K is worth the upgrade. Well, it is if you have a TV capable of displaying content in Dolby or 4K HDR. If not, you have a decision to make when it comes to streamers.

There are a lot of Roku devices to choose from on the market today. The Roku Express 3900 is the base model and an affordable solution if you don’t want 4K HDR. You’ll need to pick up the Roku Streaming Stick + for that which is a step above their newest HD streamer. If you prefer boxes to sticks, they also have the Roku Ultra 4660. It can hang with the Streaming Stick + but has a USB port, Ethernet port, and a USB slot.

With Amazon, their 4K streamer is larger than Roku’s stick and a little awkward due to its boxy nature. Both 4K streamers are both the same price and considerably cheaper than the 4K Apple TV. 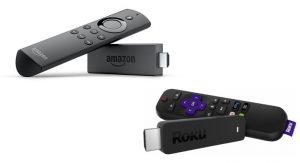 Firestick or Roku? Firestick! Why? Kodi!

If you like to tinker with your tech and want to get the most out of your streaming stick the Firestick vs Roku question is an easy one to answer. You can run KODI on Firestick; you can’t do that on the Roku. That will seal the deal for some right away.  Here are some of the great apps (also known as APKs) that you can run on Firestick (which you can’t run on Roku):

That said, we feel like Roku’s streaming sticks, and set-top boxes are more stable overall.  They provide you with more options as well considering you can pick up older sticks on the cheap if you don’t care about 4K. The Roku Express will even work on TVs that are sans an HDMI port.

In the end, both products are fine choices if you’re in the market for a new streaming device. Just keep content in mind and don’t be afraid to spend up on a 4K dongle if you plan on upgrading your TV down the line.