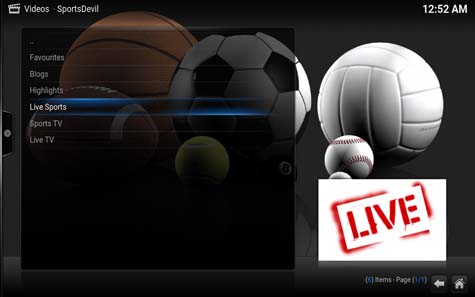 What Are The Best Kodi Sports Addons for 2022?

Unlike TV Shows and movies that can be stored on a massive server and accessed by a viewer at any time, live sports streams (And any other live streaming) need to be distributed on the fly.

Someone needs to be sending the live stream to a computer, which then feeds that stream to a server that then distributes it to viewer who are connected to the stream.

As you can see, there are a lot of moving parts involved in making a live sports stream available to other people. Servers can get bogged down when too many users are trying to access the same stream, which in turn can cause the stream to buffer.

If this happens we normally recommend finding a new stream of the same event. 99% of buffering is caused by the server being overloaded with users. It is almost never the device’s fault.  This is a common occurrence with Kodi sports addons.

Pro Tip:  One common cause of buffering (other than overloaded servers) occurs when the device you’re using doesn’t have enough power to process the stream and download the data at the same time.  This can occur when using relatively low-powered devices like the FireStick.  To solve this, get  a higher-powered device, such as the RK3229 Edal Android TV Box.

Now that you have a better idea of how live sports streaming works, let’s jump into three of the most popular Kodi sports addons. 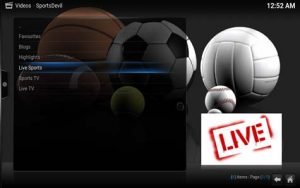 The Sportsdevil addon has actually been around for a very long time. Sportsdevil has a live sports section that lets you search through a large amount of websites that are offering sports streams from all over the world.

Sportsdevil acts as an intermediary between the viewer and a website that has a live sports stream. Some servers have listed for all types of sporting events, while some of them are more geared to certain sports.

How to Install SportsDevil:

The History of SportsDevil

Sportsdevil has had an interesting life so far as a Kodi addon. The original developer that created the addon abandoned it about 2 years ago. The addon started to slowly die with many of the server links becoming broken.

A group of Kodi developers took over the addon shortly after the creator abandoned it. They revamped all of the servers and Sportsdevil was alive and well again.

Recently it does not seem as if the developers are still updating it as frequently as they used to. But when they do update the addon it works very well. Sportsdevil is definitely an addon that you want to have on your unit if you are a sports fan. 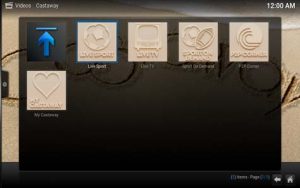 The Castaway addon is a fairly new sports streaming addon. The addon was released about 4 or 5 months ago.

How does CastAway work?

Castaway has many of the same stream sources as Sportsdevil, but also has added more sources into the addon. The developer seems to keep all of the sources up to date. We have found this sports addon to be the most reliable at the time of writing this article. We would highly suggest that you install this Kodi sports addon for your sports viewing needs.

ProSports is the newest Kodi Sports addon on the block. Prosports uses links to live sporting events on the popular website Reddit. While we do not know exactly how this is set up, what we do know is that it is a solid addon for viewing live sports on the Kodi platform.

Over the past few weeks, this addon has experienced a few issues. But at the time of writing this article, it seems to be working very well.

ProSports is definitely an addon that you want in your Kodi arsenal if you are a sports nut.

Get an RK3229 Edal TV Box so you can stream the best XBMC IPTV addons along with all of the other most popular Kodi addons. It also features an exclusive Kodi updater application that updates all of the Kodi addons and installs the newest addons when they come out.